A little karma goes a long way. Or at least that’s Nike’s claim.

If Nike’s new golf ball does what it boasts, it may just drive away some potential buyers. That’s because the new ball is named KARMA, so if you’re playing too slow, or don’t bother to tip the cart girl, you might just find yourself behind a tree, or fishing your balls out of the water. On the other hand, maybe this will become the golf ball with the best hole-in-one record. Or maybe it’ll just go in the hole more frequently for those who are about to ascend to another plane of existence…

Nike likes to point out the fact that they have the “2006 PGA Tour Winningest Driver, Irons, and Fairway Woods.” Of course, most of those are due to Tiger Woods, with additional help by K.J. Choi.

But Nike isn’t just about their top-tier guys. Nike cares about the short hitter, the duffer, the anti-Tigers in the world. Now they are giving back a little to this “other” tier with the addition of the KARMA ball.

Soft Compression
“Our objective is to create a soft 50-compression ball that would compress enough at impact to deliver a 100% performance – and I believe we have accomplished that,” says Nike’s Director of Ball Creation, Rock Ishii. “When men and women with slower swing speeds hit the KARMA, they will immediately feel how soft it is and see how well it carries.”

According to Nike, this new ball is “bringing good KARMA to golfers” in the form of the softest compression ever for a Nike golf ball. The compression rating is 50, 10 less than Nike’s previous softest ball (the “Power Soft”). Will that extra 10 make a big enough difference to warrant its creation, carve out a niche in the market, provide a stable future, and be well liked all around the world? Or is all the rage over “the softest ball ever created by&helip” well, anyone going to matter? 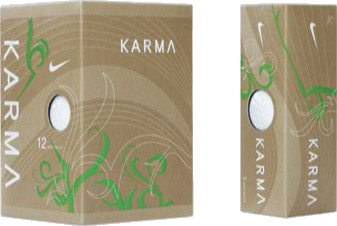 A lower-compression ball is more easily compressed than a higher compression ball, giving the slower swingers better distance than they would get with the firmer ball. Players with high swing speeds will lose tremendous amounts of energy by over-compressing the ball, resulting in a distance loss. So, long hitters need not apply.

The only other 50 compression ball I could find is the Wilson Staff Fifty, and it seems to be a well liked ball, so perhaps that is good news for the future of KARMA.

312 Dimple Design
This two-piece ball has a cover made of Ionomer and 312 dimples. We have seen the same amount of dimples before on the Nike Juice 312 ball, and the Juice seems to have decent aerodynamics. “When golfers need more good KARMA to carry it over a lake, bunker, or any other obstacle that can get in the way of a good shot, the KARMA ball will provide them with renewed confidence with its new 312 dimple design that delivers high trajectory.”

My issue with that statement is the fact that the Nike Juice – which came out November 1, 2006 – has the same number of dimples, so it’s not so new. The KARMA is set to be released one year later, on November 1, 2007. Is the KARMA merely a softer Juice? Will the Juice be replaced? We shall see.

Looks
According to Nike, “The KARMA ball also includes a unique and distinctive face stamp graphic, distancing itself from any other ball in the market.” Unfortunately, the markings are not yet known as Nike sources are keeping images of the balls close to the vest.

Packaging
Nike “consciously has packaged the KARMA ball with 50% recycled content.” The balls are packaged in a rectangle with four three-ball sleeves forming an upright square-ended rectangle, just like most of Nike’s other balls.

The box itself is adorned in earth tones, and I must admit that the packaging looks rather warm and inviting. If KARMA does help these, maybe they’ll be the first dozen balls that I don’t lose in the trees or water. Perhaps the calm design of the box will be enough to make us take a deep breath and calm down before every shot, reminding us not to over swing.

Price and Availability
The Nike KARMA is due out November 1, 2007 at an MSRP of $28. Of course, that’s $28 that you could donate to charity. One tactic will get you “12” karmas. The other… a decidedly different variety.

The Wilson Staff Fifty goes for about $16, which makes the KARMA balls about $8-12 more per dozen, raising the age old “is it worth it?” question.

This guest article was written by Count B.M. Henderson.