TaylorMade rolls out three new ways to “bomb away.”

It’s only been a few months since TaylorMade dusted off its Burner brand, now separated from the once popular Bubble shaft, and rolled out a of drivers, fairway woods, and hybrids under the Burner flag. Now the “number one driver company in golf” is introducing three additions to the Burner line: a fairway wood for better players, a new draw driver, and game improvement irons.

Like Ping’s G5 (and now G10) and Rapture line, TaylorMade’s club lines are separated more by technology and price rather than being strictly a “tour” line and a “regular Joe” line. TaylorMade’s r7 line is characterized by movable weights and playability (the ability to shape shots), while the Burner line tends toward forgiveness and, generally, lower list prices. While the r7 brand is more established and gets the majority of exposure, both lines get play on the PGA Tour.

Let’s take a look at the additions to the Burner line. 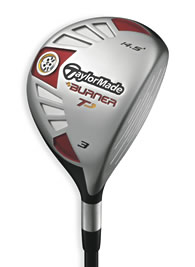 Joining the Burner Steel and Burner Ti fairway woods is the Burner TP (for “Tour Preferred”). Unlike the first two Burner fairways, which have an “oversized address area” and a medium face depth, the TP is a more traditional, pear-shaped, steel clubhead with a semi-deep clubface and compact footprint. Translated, that means at address it looks more like a “player’s” fairway wood. According to the Darrell Survey, the Burner TP has already been put into play more than 150 times this year (up to the Canadian Open) on the PGA Tour.

TaylorMade is continuing to feature the SuperFast RE*AX shafts in their woods. The Burner TP comes with a SuperFast RE*AX TP 75-gram shaft (.335″ tip) installed, which combines a high kickpoint with low torque to promote a lower, penetrating trajectory that skilled players find easier to control.

Like the other two Burner fairway woods, the Burner TP sports the SuperFast crown markings that the company claims makes them easier to aim, increasing both confidence and accuracy. 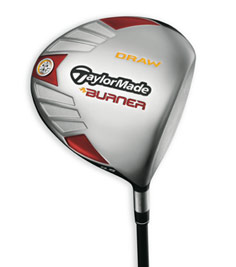 A little over six months ago, Mark King, CEO of TaylorMade, told GolfWeek that “The square-headed driver phenomenon will be over in about 90 days.” Given some recently leaked photos of TaylorMade’s upcoming triangular shaped driver and the continued use of square drivers by K.J. Choi and Ernie Els, I’ve got only one question for Mr. King: “Do you like your crow fried or grilled?”

In reality, his comment may well have been less an indictment of the “geometric” driver trend than a way to divert attention from the Callaway and Nike square drivers to the relatively conventionally shaped TaylorMade r7 SuperQuad and Burner drivers the company debuted at the 2007 PGA Merchandise Show.

Before the r7 CGB Max (the triangular driver) comes to market, TaylorMade is pushing the rather successful Burner line forward with a “draw” model: the Burner Draw Driver. According to TaylorMade, this driver delivers more clubhead speed, more ball speed, and more draw-promoting capabilities than any other driver they’ve produced.

The Burner Draw incorporates TaylorMade “SuperFast” Technology, which in practice generally translates into less weight and a longer shaft. Specifically, the driver features a lightweight 50-gram RE*AXÃ‚Â® graphite shaft made by Fujikura and a grip that weighs some eight grams less than the average grip. Additionally, the shaft is one inch longer than average, making the Burner Draw 46″ inches long. Together these weight savings and extra length are intended to create faster clubhead speed for increased ball speed and longer distance. Overall, the Burner Draw weighs approximately 20 grams less than the average driver.

The only place weight has been added to the Burner Draw is in the heel. This “Draw-Weighted Technology” makes it easier to square the clubface at impact to produce a draw or straight shot instead of a fade. Draws tend to fly lower and roll farther after landing than fades do, resulting in greater overall distance.

“The Burner Draw features more draw-producing capabilities than any driver we’ve ever created, making it exceptionally easy to turn the ball over,” said Tom Olsavsky, TaylorMade senior director of product creation. “It’s going to give a lot of golfers a serious boost in distance, and will keep a lot of golfers out of trouble on the right.”

At the business end of the Burner Draw is a deep-faced, 460cc titanium head sporting the same crown lines found on the Burner and Burner TP drivers. The Burner Draw is longer from the clubface to the rear of the clubhead than the standard Burner, which locates the center of gravity low and deep to help get the ball in the air.

The Burner Draw incorporates TaylorMade’s “Inverted Cone” clubface technology, which the company says increases the area on the clubface that delivers high ball speed. Finally, the company claims that the Burner draw has an effective MOI of 5800, just 100 points under the USGA’s limit. (TaylorMade defines effective MOI (“eMOI”) as the positive influence on ball speed on off-center hits that’s exerted by the combined effects of a driver’s MOI and clubface technology).

The Burner Draw’s heel bias and lightweight shaft should make it a good candidate for players who tend to fade (or slice) the ball and don’t swing overly hard. 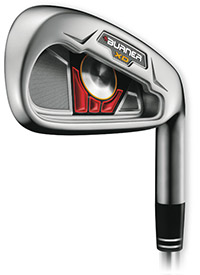 With the Burner XD irons, TaylorMade has taken a number of technologies developed for the Burner driver and applied them to a set of irons to make them faster and longer. The first Burner irons will be a game-improvement iron (low workability, high MOI). The Burner XD irons fall right between the r7 Draw and the r7 CGB Max irons at the high forgiveness end of the TaylorMade workability range.

The Burner irons include RE*AX SuperFast graphite shafts to promote faster swing speed for more yardage. Ultra-large clubheads feature a thin titanium clubface that delivers high CoR to promote faster ball speed and more distance. In addition, TaylorMade’s Inverted Cone Technology – clearly visible on the backside of the clubface – is intended to expand the sweet spot, that part of the clubface that delivers the highest ball speed.

Additionally, Burner XD saves weight with its titanium clubface. This weight has been repositioned to move the center of gravity low and deep within the clubhead, which should make it easier to get the ball in the air. The 17-4 stainless steel clubhead and titanium clubface are joined using a method called “lip encasement,” a process that mechanically unites the two dissimilar materials.

“The phenomenal distance and overall performance of the Burner family of metalwoods, especially the Burner driver, has had golfers clamoring for a Burner iron,” said Sean Toulon, TaylorMade executive vice president. “We believed that if we applied that same Burner formula to an iron, we can deliver incredible performance.”

TaylorMade Burner XD irons are clearly aimed at mid to high handicappers. They are available in 3 through 9, pitching wedge, attack wedge, sand wedge and lob wedge. Left-handed available (except for lob wedge).

Availability and Pricing
Burner TP fairway woods are already available with a manufacturer’s suggested retail price (MSRP) of $295 per club with graphite shaft and $240 with steel shaft.

In the end…
As you probably noticed, the buzz words of the Burner line are “fast” and “lightweight.” TaylorMade employs a variety of technologies intended to save weight, add clubhead speed and make clubfaces hot but forgiving. They’ve had success in resurrecting the Burner name with a whole new line of drivers and fairways woods intended to hit the ball far and straight. In an upcoming review, The Sand Trap will take a look at how well those technologies work in the Burner XD irons.

9 thoughts on “TaylorMade Burns On with TP Fairway, Draw Driver, and XD Irons”