Dean Snell headed up the development of the Pro V1/V1x for Titleist and TaylorMade’s lineup of balls for years. Now he’s got his own golf ball, and you can have it, too. How does it stack up? 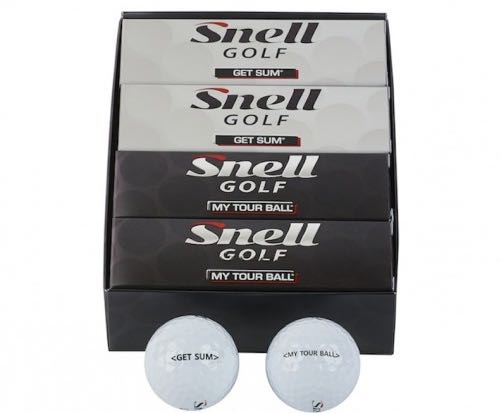 While you may not know the name Dean Snell, there is a good chance you know the names of and have probably teed up the numerous golf balls he’s helped design. After 25 years of experience in the golf industry, Dean Snell’s name is on 38 golf ball patents. He was the designer or co-designer of some of the best performing and most popular golf balls in the industry. While working for Titleist, he was responsible for the ProV1/ProV1x, Tour Prestige, HP2 Tour, and HP2 Distance. After seven years with Titleist, he moved over to TaylorMade as the Vice President of Research and Development where he produced the TP Red LDP, TP Black LDP, Penta TP, Penta TP5, Lethal, Tour Preferred, Tour Preferred X, Burner, Noodle, RocketBallz and Project (a) golf balls. So when Dean Snell came out with his own golf ball, it caught our attention and these balls should definitely be on your radar.

The golf ball market is an interesting place right now. Titleist is obviously still top dog for the “tour” level golf ball with many great offerings from Bridgestone, Callaway, TaylorMade, and Srixon. But, the problem with these balls is that you’re going to pay $44-48 for a premium tour-level performance. In the price-fixing world of golf equipment, all the premium level balls are priced similarly. That leaves the door open for competitors that don’t have to pay the Tour players, can cut out the middle man, and sell their balls directly to the consumer. This is the mission of Snell Golf; to sell Tour-level performance golf balls directly to the golfer at an affordable price point. A Pro V1 for the masses. Interested? Too good to be true? Let’s take a closer look.

Design and Technology
Some golfers want a ball that flies farther than the rest, others want green-side spin, while yet others search for the soft feeling. The Snell My Tour Ball is one that meets all the criteria. It checks all the boxes. 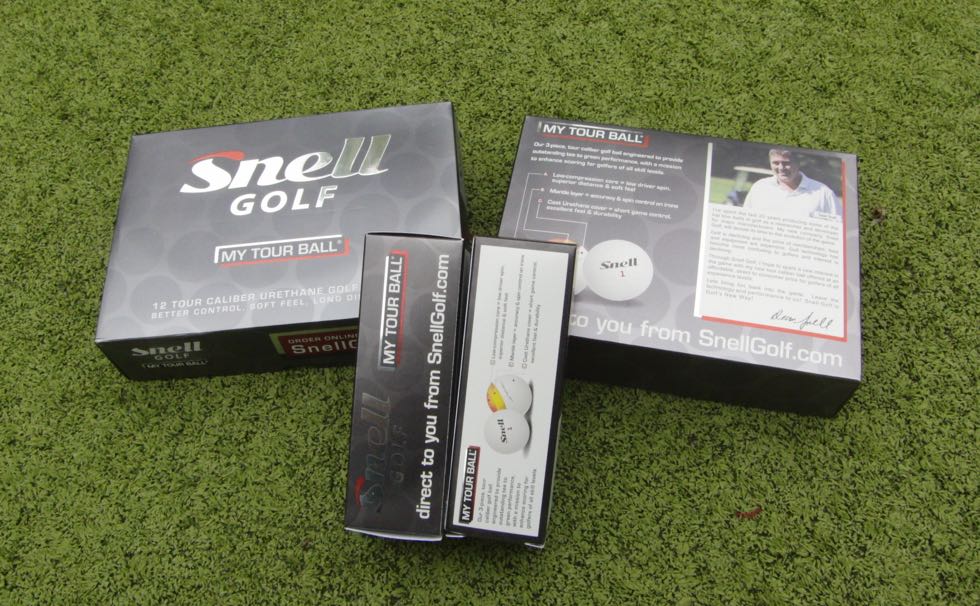 My Tour Ball is the Snell’s premium offering and sells for $31.99 per dozen, a price that includes free shipping. It’s a three-piece model with a cast urethane cover that provides low compression to reduce spin and increase distance off the longer clubs. The thin cast urethane covers is technology that is utilized by TaylorMade, Titleist, Maxfli, and of course Snell Golf. This cover gives golfers the soft feel, control around the greens, and durability we crave. The large, low-compression core (low 80s) keeps driver spin low for distance without sacrificing feel and the mantle layer allows for spin control on irons.

On one of his posts on the forum, Dean Snell said the ball was actually tested for approval at the higher end of the Tour player ball speeds. He added that they make them as fast and long as possible for the fastest swing speeds allowed and that everyone below that benefits from this speed and low spin driver combination, which means longer at all conditions.

While Snell feels his ball is longer, today it is almost impossible to have a golf ball go even a few yards longer off the tee. Golf ball companies are restricted by the governing bodies by how far they can push the speed of the ball. As a result all premium balls have to get pretty close to each other in distance. What Snell says he can do is work on controlling spin throughout the set which helps consistency in flight and control around the green. 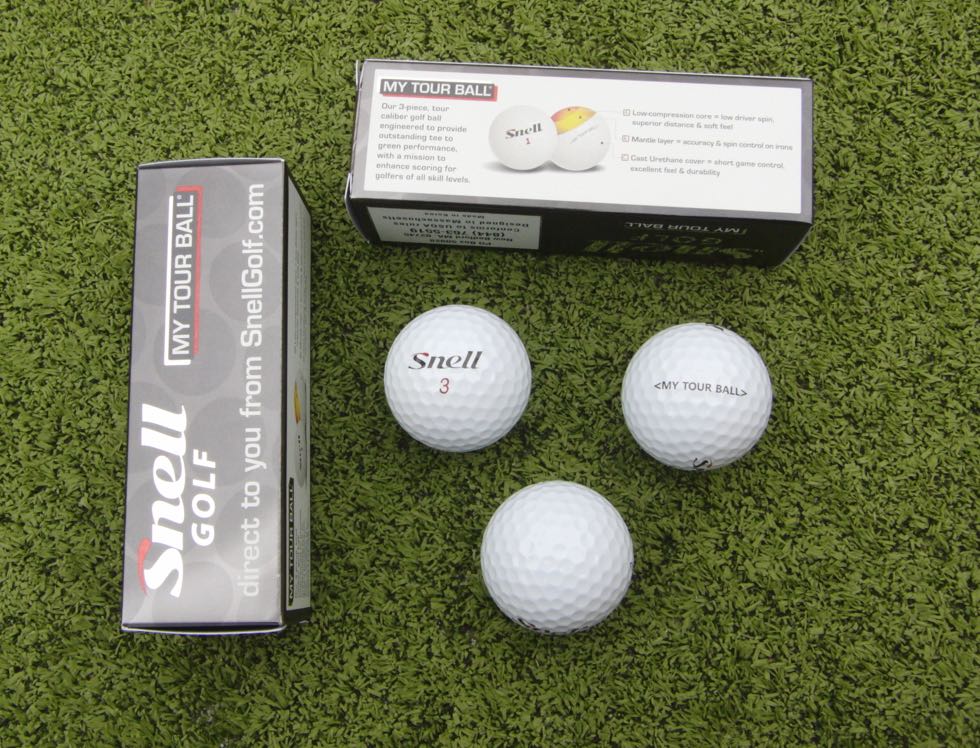 Snell feels that having a softer feeling ball around the greens is important for spin control with the shorter shots. However, When it comes to hitting a driver or long iron, he wants the ball to have a nice sound and not sound dead. Snell says he does that by working to create core sizes, core compressions, mantle layers, mantle thicknesses, materials, and construction types that find a balance in true sound testing, which is what feel is really all about. Snell says the “My Tour Ball” is lower in decibel level levels, resulting in a softer feel of sound than balls like the TaylorMade TPX.

Distance and Spin
For a comparison, TST had 5 Simple Keys® Director of Instruction Dave Wedzik test the My Tour Ball against both a Pro V1x and Kick X Tour Z ball. Dave hit three clubs: his driver, 6 iron, and pitching wedge. Taking a look at the numbers we can see that the Snell My Tour Ball lives up to its promises. With the driver the spin is similar to the other two balls, within 150 rpm of the Pro V1x. The My Tour Ball for Dave is a good combination of carry with some roll out resulting in the longer drive by a couple yards. 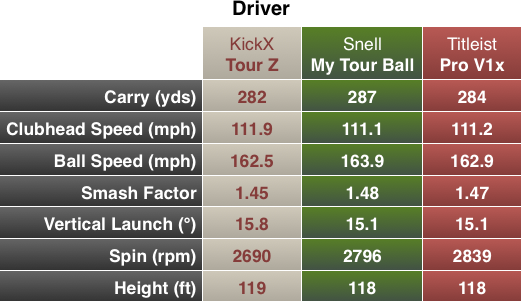 The 6-iron also performed well, carrying three yards longer than the Pro V1x but rolling out less than the Kick X Tour Z. Exactly what you would want for an iron, longer in the air but stopping sooner on the green. 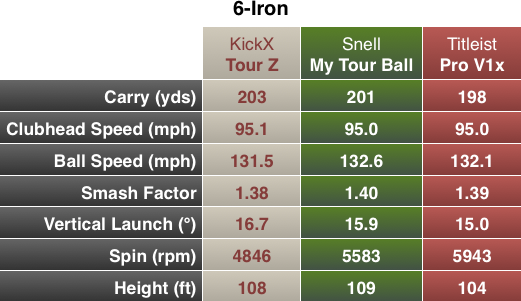 The pitching wedge for Dave provided similar results to the 6 iron. Spin is really good, between the Titleist and Kick X and he was able to spin it back one yard. 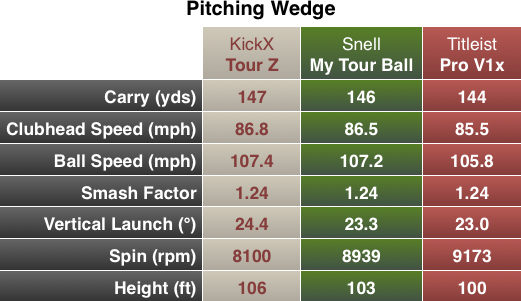 Dave was fairly consistent in his ball strikes, and the above are averages of six good shots each with each ball and each club. For example, one of the six-iron shots looks like this: 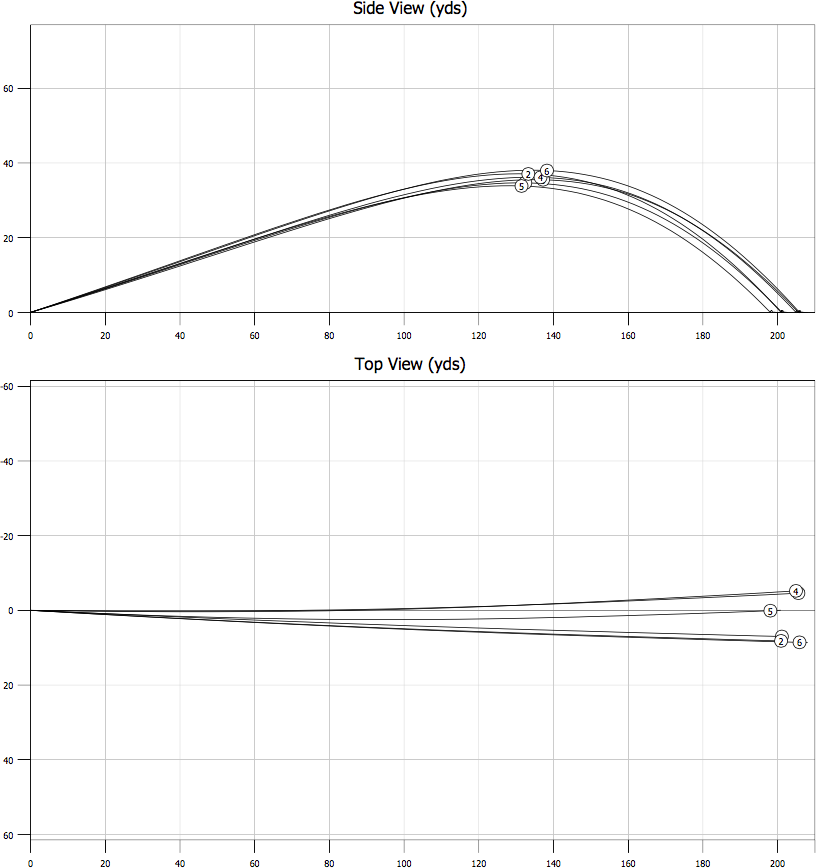 For the past two years I’ve basically played three balls. The Bridgestone B330-RX, Titleist Pro V1, and most recently the Callaway Chrome Soft. All are very good balls that have fit me and my game well. From my own testing I found that there is a lot to like about the Snell My Tour Ball. With green side spin, the Snell ball is softer than the B330-RX, comparable to the Chrome Soft but not as “grabby” as the Pro V1. I was pleased with how the ball responded when I was hitting a variety of short shots. Out of the rough, fairway and sand the ball performs as well as anything else I’ve played with. When you make solid contact and get that “click” sound the ball checks beautifully. Out of the rough and bunker you get a lot of control on those first couple bounces, even on shots that aren’t struck perfectly. With the putter I’m hesitant to comment too much on feel because it’s subjective to the player, the type of putter and insert they have in their putter. The Snell ball felt great off my putter, nice response without feeling “squishy.”

With my driver and irons I saw similar results to Dave’s. The My Tour Ball is launches a tiny bit higher and spins a tiny bit less giving me a few more yards than the Pro V1. The flight is high but penetrating. From hitting numerous drives on the course I gained an average of almost six yards off the driver and four yards with the irons. With the Chrome Soft and B330-RX, distance was basically equal. I also found more “stopping power” with the Snell compared to the B330-RX. On a full wedge shot, like with a gap or sand, the Chrome Soft had a little more “zip” to it and the ball spun back more, which could be a good or bad thing depending on the greens you play on and your shot preference. I tend to prefer more of the “drop and stop” approach of the Snell ball. It was windy the past couple days in San Diego and the ball was excellent in the breezy conditions. The ball didn’t veer offline in a cross wind and didn’t balloon playing directly into the wind.

The spin rates [of the two balls] are almost the same with the driver, so they’ll both go the maximum distance off the tee,” Snell said. “The difference is shorter shots. With My Tour Ball, golfers won’t give up any performance.

Durability and Esthetics
The logo on the ball is my least favorite aspect of the ball. The name “Snell” is larger than I like, but that’s a minor point. For those that like alignment aids on their ball for putting, the My Tour Ball has the “arrow” style that’s similar to the Pro V1 and Callaway balls. As you can see from the pictures, the branding is just bigger. 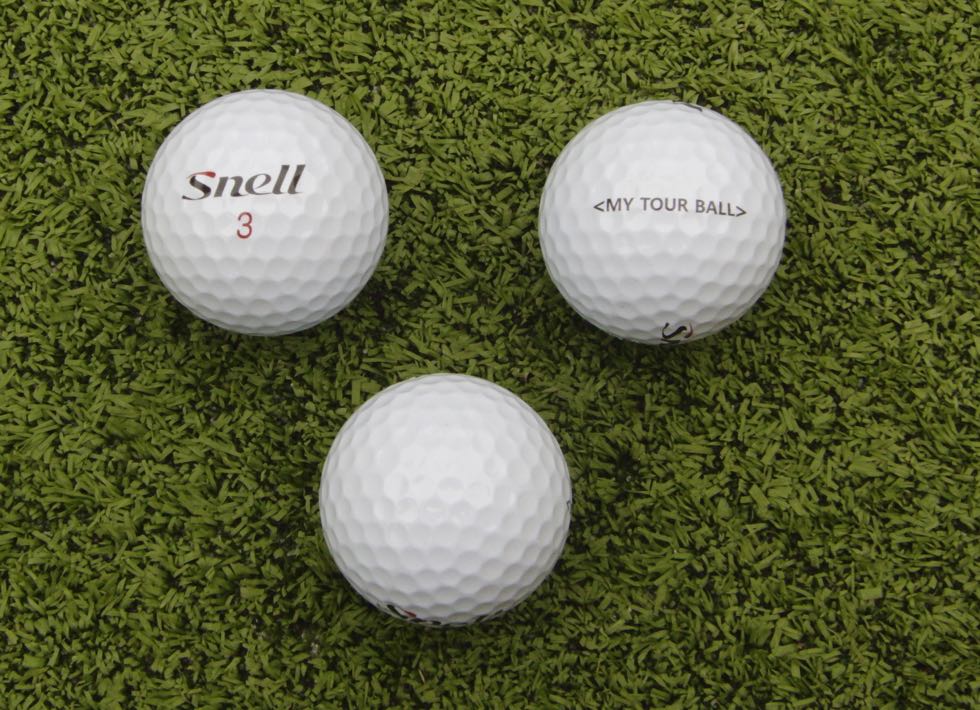 The Snell My Tour Ball might be the most durable ball I’ve ever played. The ball I tested easily lasted 2 ½ rounds and didn’t have a noticeable blemish after hitting several full wedge shots and one cart path. It’s great to know that you don’t have to replace your ball every couple of holes because you’re worried how it might affect control or how the ball will roll on the putting green.

Conclusion
I have played numerous kinds of balls in the past and to be honest, I haven’t been one to notice huge differences between tour caliber balls. The B330-RX was a good fit for me but the Snell My Tour Ball will probably be my new “gamer” ball. As advertised, the ball is long off the tee and provides a lot of control playing into the greens. The My Tour Ball being priced at $32 makes it even better, tour performance for the masses.

The greens at my home course can get firm and a shot that gets a bad bounce can end up in the deep rough just off the putting surface. It’ll be nice to rely on more shots hitting and stopping, giving myself more birdie putts. Even on days where I’m not hitting it great and I’m hitting more pitch shots from the rough, I can be more aggressive and predict how the ball is going to land on the green. The Snell My Tour Ball makes no compromises and I look forward to putting the ball in play and shooting some low scores.