If you think Ian MacCallister was miffed with the old Titleist NXT line, he’s really going to be stark raving mad with the new ones. 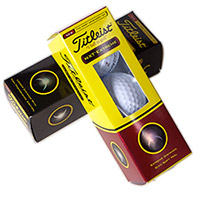 Unless you’ve been hiding under a rock the past few weeks, you’ve probably seen quite a bit of Ian MacCallister expound on the evil virtues of Titleist’s new NXT Tour and NXT Extreme golf balls. While the ads are quite humorous, Titleist seemed to be quite serious in giving the NXT line a facelift, which is pretty impressive since the older versions both were rated Gold on Golf Digest’s 2007 Hot List.

I’ve been using the first generation of the NXT Tour for the past several years. The original NXT Tour was a good all-around ball, and I didn’t have to worry quite so much about losing them as I would a $5 ball. They were, in short, a great blend of value and performance. They were also quite durable… and durability matters when you scrape your ball around the trees and off the cart paths. My only real complaint with the original NXT Tour was how soft it felt off the putter.

I couldn’t ever quite used to the feel with the putter, so I often played the Pro V1. I was quite happy to hear that Titleist was revamping the NXT line. I hoped Titleist would push the performance levels to get closer to the new Pro V1 line. If the NXT Tour was once the Pro V1’s distant cousin, I hoped the updates would make it play more like the Pro V1’s kid brother.

Would the new NXT Tour prompt me to switch back? Read on to see if the allure of a premium ball was too much or if the value and performance offered by the new NXT Tour and NXT Extreme defeated silly pride for this 15-handicapper.

Design and Technology
The revised Pro V1 and Pro V1x were the first Titleist balls without a seam with the “Staggered Wave Parting Line.” The updated Pro V1 line also added an “A.I.M.” aiming line (the “Alignment Integrated Marking” line). Both the Staggered Wave and the A.I.M. line have made the leap to the NXT.

The balls share other characteristics as well. Both feature 392 dimples arranged in an icosahedral pattern (a Titleist staple layout for a few years now). Beyond that, well, both balls are white (with a new “Pro White” paint color), round, and obey the Rules of Golf. Yeah, we’re stretching a bit, because the NXT Tour and Extreme’s similarities end there. 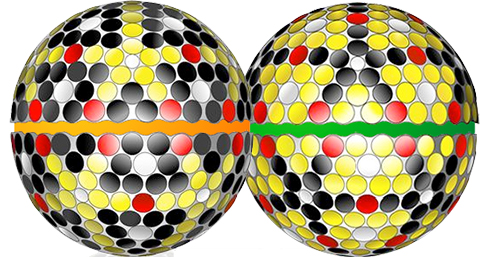 The dimple patterns on the NXT Tour (left) and NXT Extreme (right) were tweaked and a Staggered Wave parting line added to give you longer distance through enhanced aerodyanmics.

The NXT Extreme, which replaced the original “NXT,” is marketed to the budget-minded golfer who is more interested in gaining distance rather than control on and around the green. Its solid core is made of polybutadiene, which the engineers at Titleist describe as having a “high coefficient of restitution (CoR).” The NXT Extreme’s cover is made of the old standby: incredibly durable Surlyn. All of this combines to make the NXT Extreme the lowest-spinning ball in the Titleist line (for those that require a lower spinning ball off the tee – both for distance and for curbing your slice or hook).

The NXT Tour is a dual-core ball (like the Pro V1x). Both the inner and outer cores are made of polybutadiene, each with slightly different properties: the firmer inner core contributes to the distance and the softer outer core to the feel and control. The cover material is named “Fusablend,” a softer material than Surlyn.

Feel and Spin
In the past, the primary feature I considered when choosing a golf ball was affordability. Plain and simple. All I really needed was a ball I could find when I hit into the woods. As I’ve gotten better this past year and as I’ve spent more practice time on the green, I am now placing more importance on a golf ball’s feel, especially off the putter.

Both balls offered a solid, dependable feel off the flatstick, but I preferred the feeling the NXT Tour gave me over the NXT Extreme. I could never quite warm up to the Extreme because it felt just a bit too soft, like most of the lower compression distance balls on the market today. Feel is going to be a huge individual characteristic, so what didn’t work for me may work for you. Either way, rest assured the NXT Extreme was noticeably better around the greens that its predecessor, the NXT. 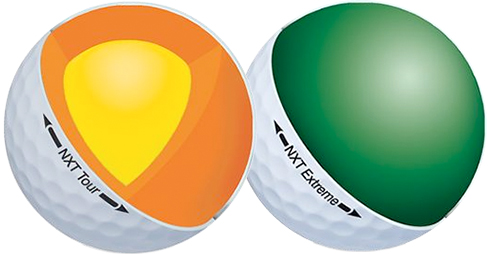 You can see the difference in core design with the NXT Extreme being solid core while the NXT Tour is a dual-core design.

The new NXT Tour feels more like its bigger brother, the Pro V1, and I quickly adapted to the ball and felt fairly confident when using it. On short wedge shots around the green, the NXT Tour spun quite pleasingly and more so than the NXT Extreme. While the NXT Extreme would land and run out, the NXT Tour had a lot more “hop and stop” capability. It’d still run out a little bit, but I didn’t have to aim for spots 10 yards short of the pin with a pitching wedge, either.

Distance and Durability
Distance wise, both of these balls seem to have gained a little. Between the two, I’d call it a toss-up: both the NXT Tour and the NXT Extreme are long golf balls. Players looking to eke that extra yard or two from one ball or the other will need to play them for themselves, and they’ll likely find it comes down to swing speed, plain and simple. With the NXT Extreme, I found I could really compress the ball well while not very swinging hard (similar to the feeling I’ve gotten with the DT SoLo), making this a good ball for golfers with slower swings speeds. Easy distance without swing hard is a great concept.

Those who swing harder will want to look at the NXT Tour first. The NXT Tour felt a bit firmer off the driver and irons and produced a more consistent distance at my clubhead speed (100+ MPH with the driver). The NXT Tour is not as “spinny” as the Pro V1s I’d previously used, so it also flies a bit straighter.

Between the two NXT models, I found the Extreme to be more durable, hands down. I bounced a few off the cart paths as well as smacked a tree or two and the ball showed few signs of damage. If you do manage to damage the cover, you can just send it back to the good folks at Titleist and they will send you a free sleeve of balls to replace your damaged one. How’s that for customer service?!?

From the outside, the NXT Tour and Extreme look identical and incorporate the A.I.M. line. Under the cover, they are completely different beasts. If you cut up an Extreme during normal play, send it back to get some new ones!

The new, improved version of the NXT Tour is not quite as durable as its predecessor. On wedge shots, I noticed little pieces of cover material in the grooves. On more than one occasion, my Spin-Milled Vokey 56° sand wedge scuffed up the ball to the point where I had to regulate it to my shag bag – not quite as bad as you’ll see with a urethane-covered Pro V1, but enough to warrant replacement in my opinion. I’m a bit picky, too: the balls were still quite playable – I just don’t like to see little scuffs when I’m lining up my 180-yard approach over water. Small scuffs are to be expected: added spin comes at a cost. Fortunately with the NXT Tour, the cost is quite a bit less than with a Pro V1.

Conclusion
With the NXT line, Titleist brought in some of the same design concepts used in the top-of-the-line Pro V1 and Pro V1x. These changes have vaulted the NXT line to its worthy spot as the top affordable golf ball on the market. It perfectly fills the niche between the higher-priced Pro V1/V1x and the DT SoLo, with an appreciable amount of upside for the better-than-average golfer on a budget. Neither model will break the bank: the NXT Tour will run less than $30/dozen and the NXT Extreme about $25.

In the end, I was impressed with both offerings. While I never completely warmed up to the NXT Extreme, it is still a good ball that provides some nice distance and is very durable, particularly for those who don’t quite reach 100 MPH with their driver. The NXT Tour, on the other hand, is much closer to what I want for my game. I really liked the feeling off the putter (although not quite as much as the Pro V1) and the wedges. Though I still have a bit of testing to go before I determine whether I want to play the NXT Tour or the Pro V1, I can already tell you it’s a close call, and for $15 less, that’s a win in my book for the NXT Tour.

NXTube.com
Titleist has been aggressively marketing these balls, both in print, television, and web advertising. One of their web efforts, NXTube.com, is an “anti-NXT” website run by the NXT’s old arch nemesis, Ian MacCallister. Golfers can submit short video clips, post comments, and spend a few minutes laughing each day. I particularly enjoyed Ian’s hit single, “Make Golf Difficult Again.”