The MP-58 provides a solid option not only for the mid level handicap player but for the scratch player as well. 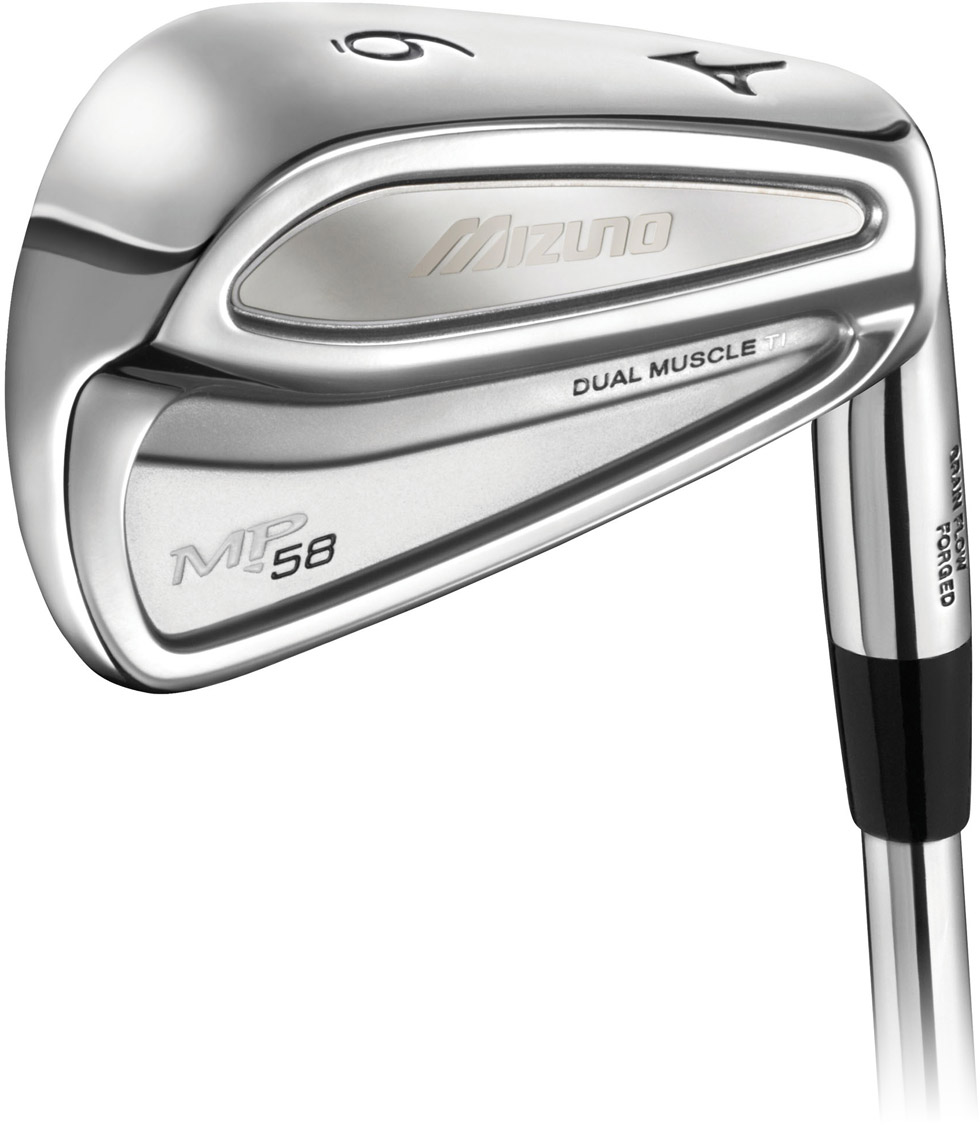 Mizuno irons have long adorned the bags of many good players around the world. A large percentage of the near-scratch guys at my club are playing them and have consistently raved about them. In fact one of them just replaced an old set of MP-32s with a new set of MP-67s, never considering another brand. When I had the opportunity to review a set of Mizunos, I jumped at the chance.

The MP-58s were actually a good fit since my last set of Mizunos (yes, I also have had them in my bag) were the T-Zoid Pro IIs – a pseudo-cavity backed club. With the advancement in technology, though, this set was bound to be slightly more forgiving and consistent: two traits any golfer is looking for in a set of clubs they buy.

The biggest question that remains, though, is whether the MP-58s can give you the playability that a one-piece forged muscleback does? Sure, I was a previous Mizuno owner but I currently sport the Titleist 695 MBs. Taking them out side by side was the best and most sure way of answering that question. So what was the result? Read on to find out.

Build and Technology
The MP-58s have a build you would expect from Mizuno. Very solid and classic – while infusing some new technology. To develop the MP-58 iron, Mizuno uses a high-tech titanium metal during the forging of the outer muscle of the iron. This enhances the feel, workability and shape of the club. The lightweight titanium also allows for an ideal amount of thickness behind the impact area to promote the soft, solid, consistent feel while increasing the perimeter weighting for playability. 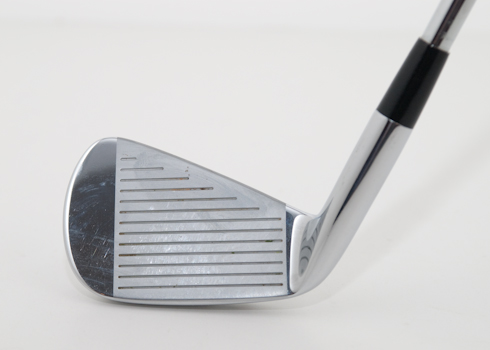 The MP-58 not only has a classic look, but the feel of a sweetly tuned muscleback blade as well.

The other parts of the build include the optimization of impact, sound, and feel by utilizing Modal Analysis, which means measuring and analyzing the vibration of the head when struck by another object. Take a look at this video to see an example of what I’m talking about.

One other big design feature in the MP-58 set is that they have modified U-grooves that conform to the new condition of competition rules for 2010 while still providing spin and maximum playability. All of Mizuno’s new designs conform to the new rule, basically ending the square groove run started years ago.

Look and Feel
One of the most underrated parts of a club is its look and feel. The look can inspire good mental thoughts and the feel and feedback will reinforce them. While the MP-58s may not look as simple or pure as a traditional blade, there might not be a better looking dual muscle club out there. The feel impresses even more and is exactly what you’d expect out of a Mizuno club.

From the top and the face of the club, it is very hard to distinguish the MP-58 from nearly any other blade out there. It has a thin top line at address similar to my current blades. Also the size is very similar. If anything, the MP-58s are slightly larger. The good thing is that it is barely noticeable and has no effect on the feel of the club.

Can you really even tell which one is the old T-Zoid, the Titleist 695 MB, or the new Mizuno MP-58? OK, so the wear marks give it away, but nothing else.

The bottom of the club is just as similar to a blade as the top. In fact it is hard to distinguish between any of the 50- or 60-series clubs when they are in a bag looking up at you. Only the Mizuno logo near the heel and the number of the club towards the toe stamp the bottom of Mizuno’s game-enhancement irons.

At the back is where the club differs most from other irons. From the top and front, the look is forged but the back is where the dual-muscle backing stands out. The bottom of the back is thicker than the top and features a small cutout that is embossed with the Mizuno name. There is a smooth transition to the thin top that has only a couple of ridges that are visually appealing. The top of the toe is adorned with the MP-58 name. 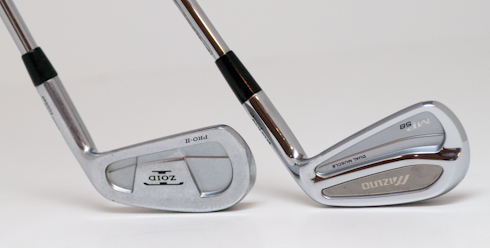 Here you can tell the difference but the size is pretty close and you can see where the lower center of gravity comes into play with the MP-58.

The feel of the MP-58 is quite nice too. There wasn’t a noticeable difference in weight, which is good if you are transitioning clubs. Not only does the MP-58 look like my forged blades, they felt like them at setup and through the swing.

During contact there was a solid feel. I could tell where I hit the ball in the face of the club, but it wasn’t nearly as precise as my current blades were. If I base the feeling of the 695s at 100%, I would say the MP-58s were around 75%. Definitely softer than the cast clubs out there, but solid enough for a person to get the feedback they need. Overall the MP-58s are pleasing in both looks and feel.

Performance
With the MP-58s looking and feeling as good as they did, I was hoping they would perform at a high level too. It took a few swings on the range but once I got in a groove there was no doubt.

I spent about 45 minutes going through a normal range session and swapped in and out the 695s and the MP-58s. I started with the wedge and worked my way up to the long irons. The shorter irons were where you could feel the softness the most, but it didn’t affect the performance one bit. The ball had a slightly higher launch angle but the distance was nearly identical. I swapped the 8-irons out on four successive shots and I don’t think there was more than a three-yard difference between each landing spot. 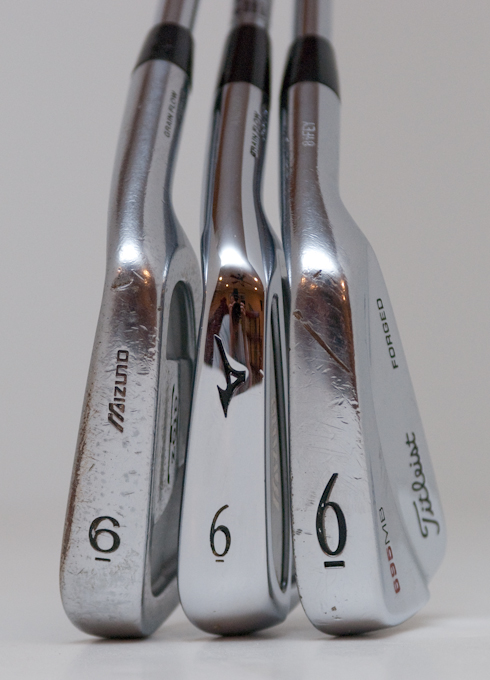 I’ve hit all of these clubs numerous times and the MP-58 tops them all.

On the longer irons it was more of the same. There was a higher launch angle and very similar distances. If anything, the MP-58s could have been a bit longer. What I started to notice a lot more on the longer irons was the forgiveness of these irons. I hit a few shots fat or on the toe and did not lose nearly the distance I would have with the 695s. One memorable one I could have sworn I hit so fat that the ball would have gone maybe only three quarters of the way to the target but the ball nearly carried where some of my normal shots went. I was extremely pleased in this respect. I may carry a low handicap but all of us can benefit from this type of feature in our irons.

As for on the course, I had a chance to put the MP-58s in my bag for a few rounds. Again, there was no transition period whatsoever. I just hit the MP-58s the same way I would my current clubs. Distances were very similar. If there was one thing I couldn’t do as well with the MP-58s on the course it was working the ball. I did not, and had a hard time, trying to hit a hard draw or cut. My normal draw was there, but not nearly as much as I am use to. 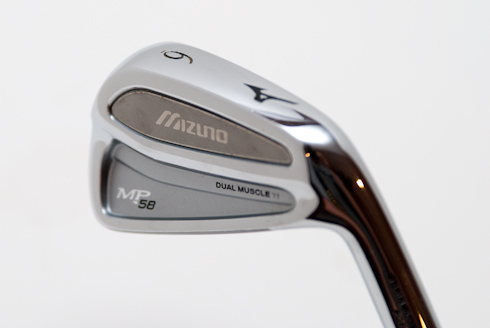 Even without working the ball much, I had a great first round with the MP-58s. I hit a handful of what I would consider very good iron shots. I had at least four birdie putts inside 20 feet that were the result of well-struck irons. I only hit a couple irons I wanted to have back but even those were not that bad. In the end, I hit 12 greens on a day where it was under 50 degrees, cloudy, and with winds blowing around 20 miles per hour. The conditions were not that good to say the least but I still hit some quality shots and the Mizunos helped me to a 74 on a good course without having played for a month. Not bad at all.

Conclusion
Without a doubt, the MP-58 gets my approval. I’ve always been a big fan of Mizuno irons and had high hopes for the MP-58s. They performed nearly exactly as I had expected. The one area that I was caught slightly off-guard was the forgiveness. Of course, it was very forgiving so that not a bad thing.

In my opinion, the MP-58 could be found in the bags of a range of players. Not just the middle handicapper, but the scratch as well. In testing these out, I don’t think that I’d be compromising too much in any direction by playing the MP-58s. The fact is because they are so easy to hit and have the look and near-feel of a traditional muscleback or blade, I’m probably going to keep them in my bag. After a few range sessions and the round I had, I’m going to use them for the next few rounds and see how things go. I’m quite optimistic that the MP-58s will be around for a while.