Does the Twin Cities area need another golf course in an oversaturated market? Does converted farmland make a good golf course? Yes and yes (although about three million yards of dirt had to pushed around first).

With over 580 golf courses to choose from in Minnesota, course owners have to work hard to attract golfers with an attractive layout, good maintenance, and quality service in order to fill their tee times and turn a profit.

Does Riverwood National have what it takes to attract golfers in a Twin Cities golf market that offers many choices for your golfing dollar? Read on to find out.

Riverwood National opened on May 20, 2006. Located 34 miles northwest of Minneapolis in Otsego, MN, it is the big brother 18-hole championship course associated with the executive Vintage Golf Course, both of which owned by Chris and Linda Bulow. What once was farmland has now been converted to a residential golf course community with various sized homes and town-homes scattered throughout the complex. 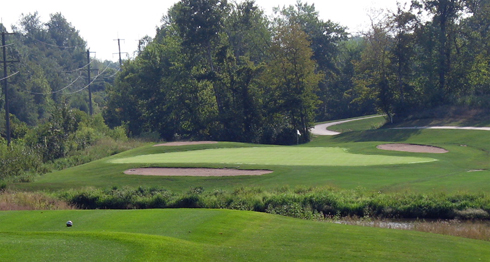 Conditions
In a word: fantastic. I have played this course three times this year (July, August, and September) and each time was impressed by how well maintained the course has been. We had some extreme heat at the end of July and the course was green and plush compared to some of the other courses in the area that were quite brown. Superintendent Jerry Webb and his crew have done an outstanding job at getting this course in playing condition in their first year. I look forward to seeing how the course plays out in the next few years as the rough is grown in a bit more and trees are added.

The greens were quite receptive to short iron and wedge shots as most landed and stopped or slightly released. Putts rolled nicely and the green speed seemed just right – not too fast and not too slow. The greens also do not feature any major undulations or multiple levels but are more subtle in their design which I found to be a nice change of pace compared to several courses I had played recently.

Design and Layout
Riverwood National was developed by Bulow, Inc. and was designed by David A. Kirscht. Being relatively flat farm land, over three million yards of dirt was moved to create the course. If your not a fan of doglegs, then this is not the course for you as five holes feature doglegs with several being 90°.

The second hole does not bode well for golfers who slice. The houses are close and very reachable.

I’m not the biggest fan of houses on golf courses, and Riverwood unfortunately have a few. They distract from the beauty of the course and the round you’re playing. Five holes have houses on the right side of the fairway and are potentially reachable for a golfer with a bad slice. Ten holes do not feature houses on them, and I only found myself using someone’s window or deck as my aiming point twice the entire round (oh, and the silo for my second shot on the par-five 14th hole).

As with most courses being built today, length is the major feature that protects Riverwood National the most as it plays to 7012 yards from the tips. Three of the four par threes are over 200 yards with the sixth hole being the longest at 226 yards. Playing from the Black tees, I found myself hitting driver quite a bit more on the par fours as opposed to hitting more hybrids or long irons on the shorter Blue (6376 yards) and White (6064 yards) tees. Water has also been strategically placed throughout the course so you have to think your way around a bit as compared to being just able to bomb away with your driver. 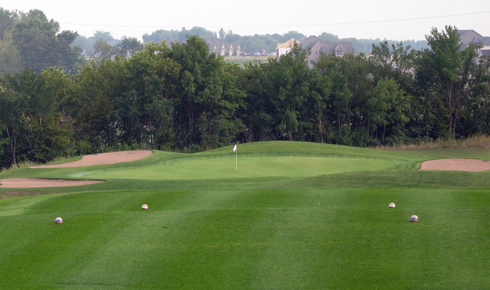 The par three sixth hole stretches out to a whopping 226 yards.

One design feature I found to be nice was the Red Tees (4722 yards) and the removal of most of the carries required over ponds and marshes found on the other tee boxes. This will benefit younger golfers and ladies who perhaps cannot hit the ball far enough yet want to play a full-length course as opposed to an executive course.

Another feature I liked was the shorter par five finishing hole. A great risk/reward hole as you are tempted with the option of threading the needle between two ponds to reach the green in two.

The eighteenth hole is a great risk/reward hole. A good drive will leave you with 250 yards or less to attack the green. (In case you were wondering, my ball ended up in the pond on the left.)

The Uplink GPS system on the Club Car Precedent cart was a nice added feature. Yardages were provided to all the hazards as well as the front, center and back of greens. My only complaints were that the GPS didn’t tell you how many yards you had in case your shot went through the back of the dogleg. I also didn’t care for the advertisements that popped up every other hole asking if you wanted to buy a house. The GPS system beeped at you when you got too close to the green and warned you of the rough cart paths on several of the holes (which were being worked on this fall).

Cost Factor
Riverwood National is a great deal. The course offers good golf for a great rate. Weekday rates are $39.95 with a GPS-enabled cart and are $46.45 on the weekend. Anytime you can play golf with a cart (with GPS) for under $50 is a bargain in my book. Membership rates are between $795 to $2295 based on when you want to play and whether you get a single, couple or family rate. Director of Golf and PGA teaching professional Bill Laimer and his staff offers various lesson rates and plans to help you improve your game on the expansive driving range that is shared with the Vintage Executive Golf Course.

A bar and full service banquet facility are also on site in the 5000 square foot clubhouse with a patio overlooking the eighteenth green. Service was outstanding each time I have played and the staff really goes out of their way to make sure you have an enjoyable golf experience. 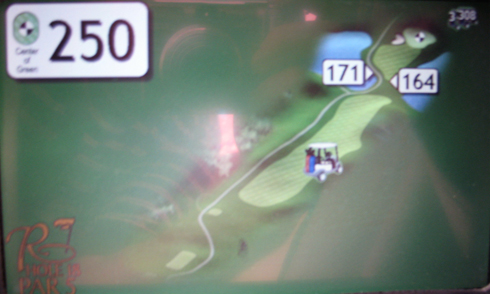 The Uplink GPS is a nice feature that gives all the necessary distances. Too bad it didn’t tell me to lay up rather than go for the green in two.

Conclusion
I was quite impressed with this being the first year Riverwood National was open. I can only imagine at how much better the course will play in the future as over four thousand trees will be added over time and the course matures. As an added bonus, the Albertville Premium Outlets are only four miles from the course so you should easily be able to convince your spouse to drop you off at the course while they enjoy some shopping.