Annika Sorenstam holds on to her lead and successfully defends her trophy at the John Q. Hammons Hotel Classic. 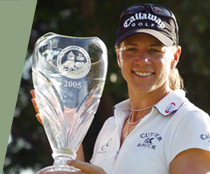 In the battle of the LPGA titans Annika Sorenstam takes the trophy this week. When Annika is in the lead heading into the final round of a tournament those that follow her should be ready to make a darn good challenge. Although Maria Hjorth took the lead in first round action with a 64 she still needed the ability to rally for two more days. Unfortunately she couldn’t put together the two good rounds necessary to keep Sorenstam from cozying up to the top spot on the leaderboard in second round action.

By the final round of the 54-hole tournament it was all Annika, even though rookie Paula Creamer rallied from a tie for fifth place climbing to second place on the scoreboard. Sorenstam held on with a 2-over par 73 while Creamer came on strong with a 2-under 69 to nearly grab the tournament from the number-one LPGA golfer in the world. In the end however, Annika prevailed.

Sorenstam showed us today that if you can put two good rounds atop the leaderboard and hang on to your lead in the final round you can pull off a victory. Going along at a bit of a lumbering pace, Sorenstam made pars throughout most of the course. Tiring out a bit at the 16th and again at the 18th Annika bogeyed allowing rookie Paula Creamer to throw down the gauntlet. Paula has become very good at inspiring herself when the going gets tough. Against Christina Kim and several others tied atop the leaderboard at the Sybase Classic in May Creamer pushed forward in a grueling downpour stomping through her competition and delivering her first victory.

But Paula Creamer had her moments of trepidation as well today making back-to-back bogeys on the 16th and 17th holes. Paula hadn’t even made her first birdie until the 7th hole and gave it back on the very next one.

Paula Creamer is still ticking off her list of “must-do’s” for 2005. She is currently showing her fans that she has the ability to take over the number-one position on the official money list currently occupied by Sorenstam. Although she came in second to Sorenstam this week the “Pink Panther” focuses well in the final round and really goes after her prey, much like a younger Annika. As we can see Annika fading a bit on Sunday we see just the opposite in the 19-year-old Rolex Rookie of the year. Perhaps this is the beginning of a “passing of the torch” from one generation to the next.

And what about Maria Hjorth who charged out of the gates with an unbelievable 64 on day one with birdies on almost half the golf course including an eagle on the par-5 14th? Well Maria is like many terrific LPGA golfers on tour who begin well but just can’t hold on through an entire tournament. Her second round slowed her down a bit but didn’t take her out of the competition. As a matter of fact Maria only slipped into a tie for second on day two and had the ability to lead a charge on Sunday. Unfortunately Hjorth’s Sunday scorecard looked like it didn’t even belong to the same person as she had NO birdies whatsoever and sprinkled a round full of pars with four bogeys to drop to a 4-over 75. Maria must have been disgusted with herself after knowing that she allowed herself to lose this tournament. This could qualify for a “choke” award which happens as a golfer folds when the pressure becomes too great. It’s a classic case of “number-one golfer in the world breathing down your back only one-hole behind”. It must have made Hjorth extremely uncomfortable.

As Creamer keeps proving her credentials week-after-week other well-known names did not live up to their expectations. Christina Kim dropped to 52nd place, tying with Charlotta Sorenstam. Although she played her first two rounds at 1-over par Christina blew up in her final round scoring a disappointing 78. It was unusual to see Christina keeping company with Annika’s sister who rarely makes a stand on the leaderobard. I think Charlotta plays just to keep her sister company while she’s on tour.

Both Rosie Jones and Karrie Webb tied for 39th place. Neither had spectacular rounds so let’s just leave it at that.