Ernie Els and Mark O’Meara headline the Dubai Desert Classic which has drawn another strong field to compete for one of the richest purses in golf. 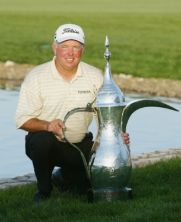 Doral isn’t the only must-watch tournament this week. The European Tour makes its yearly stop in the United Arab Emirates for the Dubai Desert Classic. This is the 16th year the tournament will be played at Emirates Golf Club, a course known as the “Desert Miracle” for its lush fairways and greens amidst the arid desert conditions.

Defending champion Mark O’Meara is the tournament’s oldest winner at 47 and will defend his title this year. However, the favorite again is sure to be World #3 Ernie Els. Before the season, many were predicting this would be Els’ breakout year. However, The Big Easy is the only player in the top four of the World Rankings without a win in 2005. Dubai will be a good place to rectify that. Els has won the event twice (1994, 2002) and holds the course record of 61.

Other notable names in the field this year include Greg Norman, who continues to delay his debut on the Champions Tour, Ben Curtis, and Sandy Lyle. Ian Woosnam, the newly appointed European Ryder Cup Captain, will likely see this tournament as a chance to make a statement to prospective players.

Of all the players in this field, the Desert Classic is especially important for Colin Montgomerie who needs a good finish to break into the top 50 of the World Rankings to assure himself of a spot at The Masters in April. Monty has been playing well recently, scoring a tournament low 63 before the Nissan Open was washed out. He commented, “That round has given me huge confidence and I’m very excited about my form.”