Muirfield Village is no pushover. Not only does the course throw 7400 yards at players, but it throws sand, water, elevation changes, and tricky greens, too. Players will have their hands full this week!

Muirfield Village Golf Club, Jack Nicklaus’ home course in Ohio and host of The Memorial Tournament since 1976, is a playground. Nicklaus designed and built Muirfield Village, and it’s no coincidence that the tournament to which it plays host is called the “Masters of the Midwest” – many believe Nicklaus modeled much of Muirfield Village after the famous host course of the actual Masters, right down to the diagonal peanut-shaped par-three twelfth green over water.

Like Augusta National, Muirfield Village has four primary defenses: a meandering creek that sometimes widens into a pond, changes in elevation, lots of sand, and deceptive, sloping greens.

This photo essay examines the first three of these defenses. For the latter, why, simply know that last year in the first round, I watched Jesper Parnevik four-putt from 35 feet on the relatively mild second green.

A Meandering Stream
Rae’s Creek is a name even casual golf fans associate with Augusta National. While Muirfield Village’s creek may be nameless (so far as I know), I can say this: it comes into play a lot more frequently than Rae’s creek. Players must be mindful of the water on their tee or approach shots on no less than ten of the eighteen holes. On others, the water merely serves as decoration and doesn’t often come into play. Only a handful of holes are free of water entirely, but those holes have plenty of their own defenses… 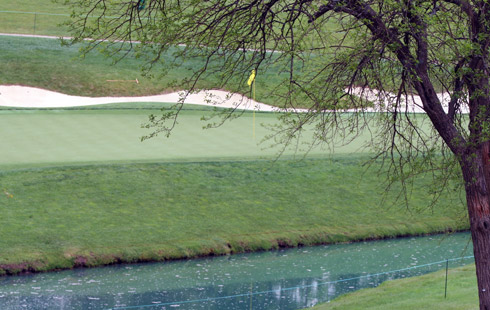 Players will not want to leave their approach shot right to the narrow, long 14th green. 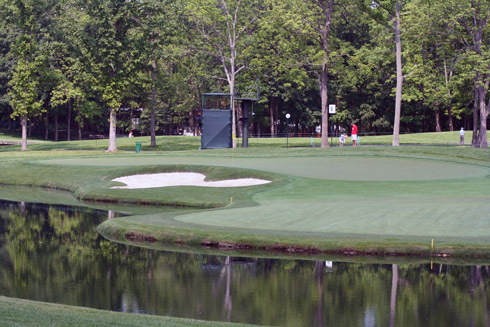 The water on the sixth hole comes into play rarely, but will be a factor if there is any wind and especially when the pin is front left. 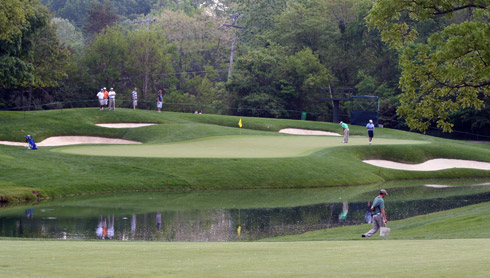 The third green is well protected by water. Players need a clean lie and a good line to the pin, as shots that come up short come up wet.

The Ups and Downs
If you pay attention to the announcers covering The Masters for USA and CBS and attempt to keep track of the number of times they say “uphill” or “downhill,” you’ll likely lose your mind. Muirfield Village is much the same: steep climbs, steady descents, and enough elevation to account for 80 yards difference on tee shots going up- or downhill. These elevation changes make club selection both off the tee and coming into greens critically important.

Though massive changes in elevation don’t convey themselves well to your TV screen, I’m hoping that the images below provide some sense of the height changes seen at Muirfield Village. 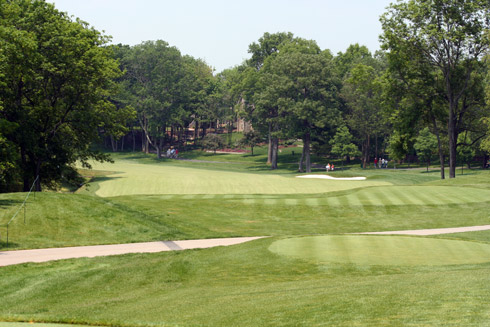 The eleventh hole, a reachable par 5 of 567 yards, drops about 75 feet from the tee to the fairway… 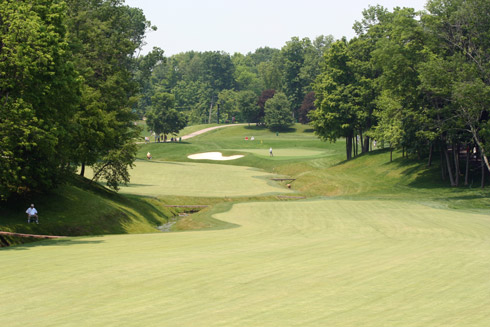 … and continues to drop another 50 feet or so by the time you reach the green, allowing even shorter hitters to hit the green in two. 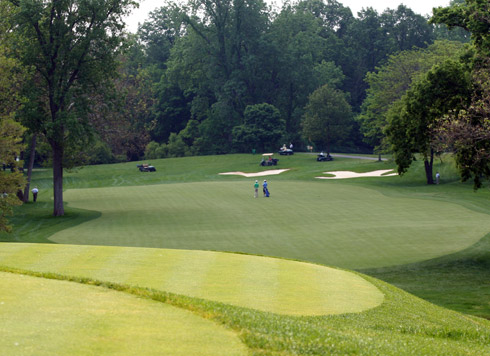 The tee shot off the third tee, typically played with a three-wood, drops to a wide fairway 80+ feet below the tee. 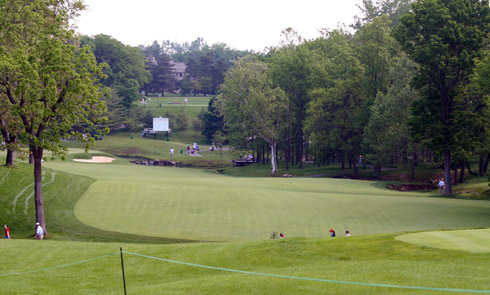 At the relatively short 455-yard par-4 second, players can expect an extra 20 yards simply by playing downhill off the tee. 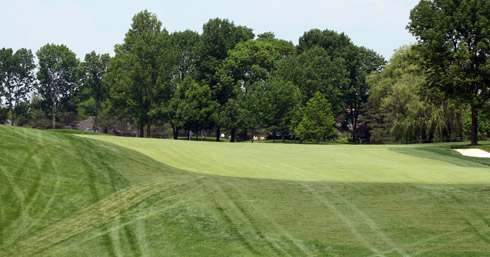 Lest you think every tee shot is downhill, the tenth hole serves as a quick reminder that what goes down must go up. This hole rises 50 feet from tee to fairway, and over 100 feet from the small pond just in front of the tees to the fairway. 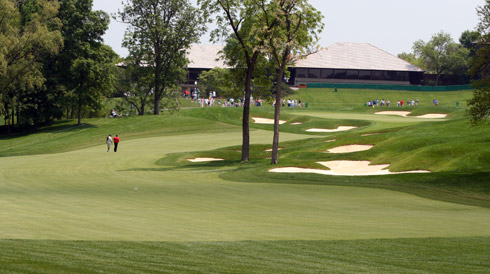 Players finding the fairway at the eighteenth must play two or three clubs more to the green, which sits 50 feet above the driving area.

The Furrowed Beach
Unlike Augusta National, the sand at this year’s Memorial will not be as white as a virgin’s wedding gown, nor will it be flat. As reported earlier today, the PGA Tour has agreed to Jack Nicklaus’ request to furrow the bunkers at Muirfield Village, further increasing the penalty for finding any of the course’s 72 bunkers, all of which protect driving areas and greens.

This year, several new bunkers have appeared as well, including a fairway bunker on the left side of the 13th hole, a 455-yard par 4. This sand trap is so deep that Manute Bol would not be able to see the green standing in the middle of the bunker.

Muirfield Village’s bunkers blithely combine both European and American influences. Several smallish “old country” pot bunkers combine with “fingered, amoeba-like” American bunkers to form a delicate blend of old and new. Some bunkers feature tall grassy walls similar in function if not form to the sod-walled bunkers of St. Andrews and other such courses, while others lay relatively flat with the surrounding terrain.

Unfortunately for the golfer, while the bunkers may have a bit of an identity crisis, they all know their job: protect and punish. 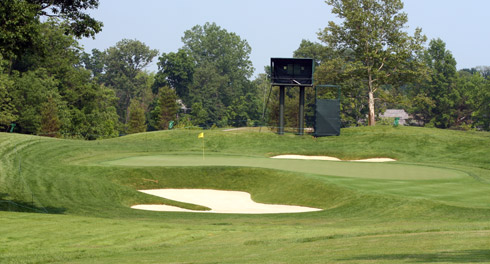 The 215-yard par-3 sixteenth is guarded front and back by bunkers. The front bunker sits six feet below green level. 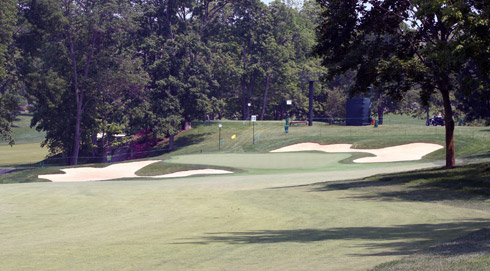 After avoiding the deep fairway bunker left on 13, your approach shot to this 455-yard par 4 had better find the putting surface. 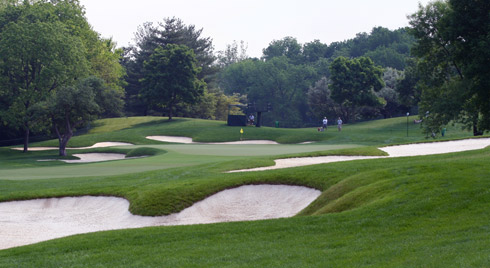 The first hole may look pretty, but competitors must fit their tee shot between bunkers on their drive (foreground) and approach or face the fury of the furrows.

The Fifth Hole
Perhaps my favorite hole at Muirfield Village is the relatively short 527-yard par-5 fifth hole. Last year, the scoring average was 4.592, ranking this hole the easiest on the course. Historically, only the 503-yard par-5 fifteenth hole is easier. If you can navigate through its defenses, it provides an eagle or birdie opportunity, but get ensnared and double bogey looms large.

Off the tee, players must cut a 3W to a fairway 120 feet below them, going as far right as they dare to cut off this nearly 90° dogleg. But hit the ball too far straight or too far right and you’ll find a piece of the meandering creek. From here, players must decide whether to lay up or to go for the green, ideally with a draw to avoid the water front and left. Players who bail out to the right face a dangerous chip to a green protected by false fronts, a ridge, and a devilishly tricky surface. Players going through the green must play from one of the two furrowed bunkers to a green sloping violently away from them: Edoardo Molinari couldn’t keep a ball within 15 feet from either bunker in a practice round today. 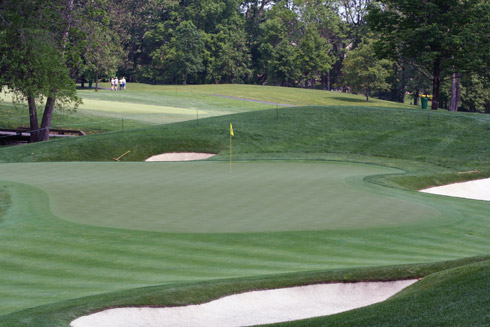 What appears to be a relatively easy pitch from the bail-out area on the 527-yard par-5 fifth hole is actually quite difficult once the green’s contours are taken into consideration.

The fifth hole exemplifies all that Muirfield Village has to offer: elevation changes, fairway and greenside bunkers, water, and deceptive and sloped greens. Suffice to say, players in this week’s Memorial will have no walk in the park.

At nearly 7400 yards and playing to a par of 72, I’d be remiss if I didn’t even mention what may be Muirfield Village’s primary defense: length!