Checking in on the world’s hottest golfer.

Before this year, Jason Dufner didn’t have much going for him. Sure, he had made over $7.5 million dollars in his career, but he had yet to win a PGA Tour event and he had just 16 top-10 finishes to his name. Prior to 2012, Dufner had missed the cut in over 40 percent of the events he played and his highest placing in the FedExCup was 25th (in 2011). Add to that his major-league choke in last year’s PGA and his laughable last name, things weren’t looking up for Jason Dufner.

But this year? His only missed cut was his first event, the Sony Open in Hawaii, and he has hardly come close since. A few weeks after a solid T24 at Augusta (his highest finish in the event) where he held the 36-hole lead, Dufner broke through at the Zurich Classic of New Orleans the last week of April, carding -19 and beating Ernie Els in a playoff while also holding off world number one Luke Donald. He’s also spending time with the golf team from his alma mater, Auburn University, and quoting Kanye West on Twitter (he’s actually an interesting golfer to follow on Twitter). After two wins, Dufner leads the Tour in money earned (already having surpassed his career high), ranked eighth in the world, and I think at one point he might just have cracked a smile. Maybe.

Number One: Childhood
On March 24th, 1977, Jason Dufner was born in Cleveland, OH. He lived there for much of his early childhood before moving to the Washington D.C., and later to Ft. Lauderdale, FL. After playing mostly baseball as a child, Dufner began playing golf in ernest when he was 15 years old, and played for St. Thomas Aquinas High School for three years.

Number Two: College and Amateur Career
Dufner, an economics major, was a walk-on at Auburn University, a public school in Alabama. Dufner was a very solid player, but never accumulated the amateur resume of hot-shots like Rickie Fowler, or Matt Kuchar. 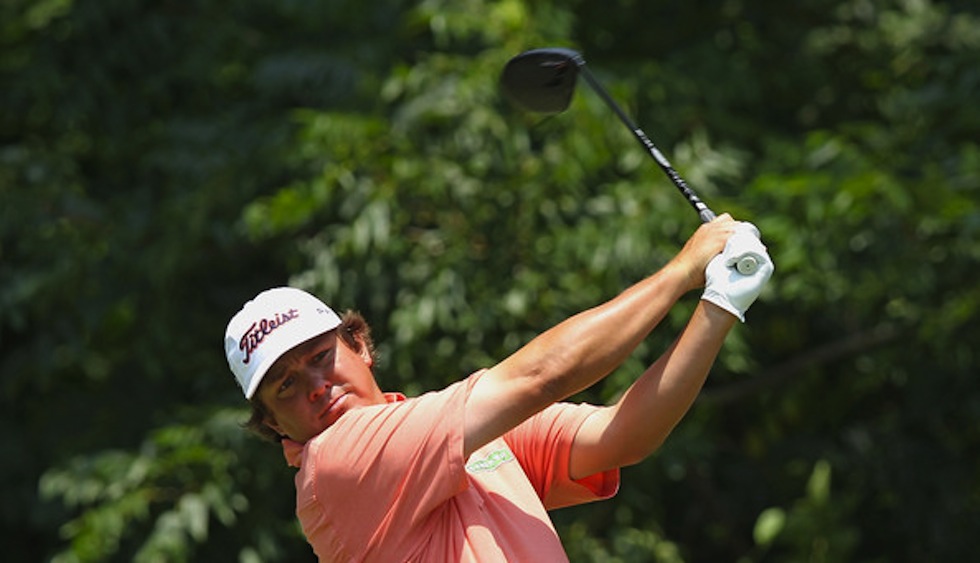 He was an honorable-mention All-American in 1997, an All-SEC player in 1997, 1998, and 2000, and he won three times. His one amateur brush with greatness was the 1998 U.S. Amateur Public Links Championships at Torrey Pines in San Diego. Dufner made it to the finals where he was defeaed by 2008 Masters champ Trevor Immelman, 3&2. Dufner graduated with his degree in 2000.

Number Three: Early Pro Career
After playing the Golden Bear Tour in 2000, Dufner began 2001 with no status on the Nationwide Tour (then the Buy.com Tour). Dufner managed to Monday qualify for the Hershey Open in July, and his T12 finish earned him a spot in the next week’s event, the Wichita Open. Dufner won the Wichita, carding -22, and he would earn $151,394 on the year, which put him at 21st on the money list. He also qualified for the U.S. Open, but was cut after rounds of 74 and 78.

2002 was not quite as good to Jason Dufner. Although he was able to play a full season on the Nationwide Tour, he missed more cuts than he made, went winless, and earned only $51,832. That was good for 77th on the money list, good enough to remain on the Nationwide but far from his goal of making the PGA Tour. 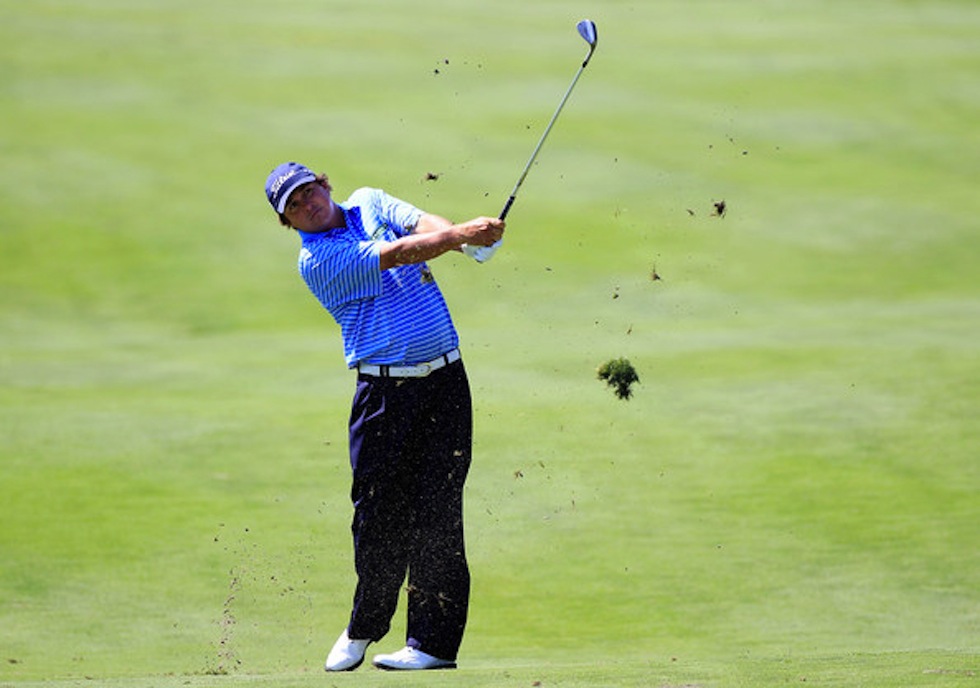 Though he again went winless, Dufner had a rebound year in 2003. Despite four missed cuts to begin the year, Dufner went on several very solid runs, including making 20 of his last 22 cuts. In 26 total events, Dufner made $237,637 for the year, 10th on the Nationwide Tour and good enough to earn him his PGA Tour card for the first time.

Number Four: Tour Oscillation
2004, Dufner’s first season on the PGA Tour, was an odd one. Though he made $317,770 for the year, a season-high at that point in his career, he managed only one top 10, at the Chrysler Classic of Greensboro (now known as the Wyndham Championship). Dufner missed 16 of 28 cuts and did not earn his 2005 PGA Tour card.

With full status on the Nationwide Tour in 2005, Dufner headed back to the minor leagues, where he made just $97,435, not enough to regain his PGA Tour status. Still on the Nationwide in 2006, Dufner’s form came back. He won the LaSalle Bank Open and made 20 of 24 cuts, earning $310,666 in total. His position of eighth on the money list got him his PGA Tour card back. He also made the cut in his first major, finishing tied for 40th at the U.S. Open at Winged Foot.

Back on the PGA Tour in 2007, Dufner took advantage, playing 32 events. Dufner made one top 10, a T6 at the John Deere Classic, and made 18 cuts on the year. One of those cuts was the U.S. Open at Oakmont, where Dufner’s opening 71 was good enough to keep him in the money. He accumulated $574,992 on the year.

With only conditional status in 2008, Dufner made just $284,138 in 16 events, not enough to retain his card. He did manage, however, to make it through Q-School, granting him full status once again for 2009.

Number Five: PGA Tour Ascension
Though he remained winless on the PGA Tour, 2009 was Jason Dufner’s early breakout year of sorts. He recorded six top 10s, including a T3 at the RBC Canadian Open and a T2 at the Deutsche Bank Championship. Dufner finished the year with $2,190,792 earned, about quadruple his previous best, good for 33rd on the money list and 11th in the FedExCup standings. 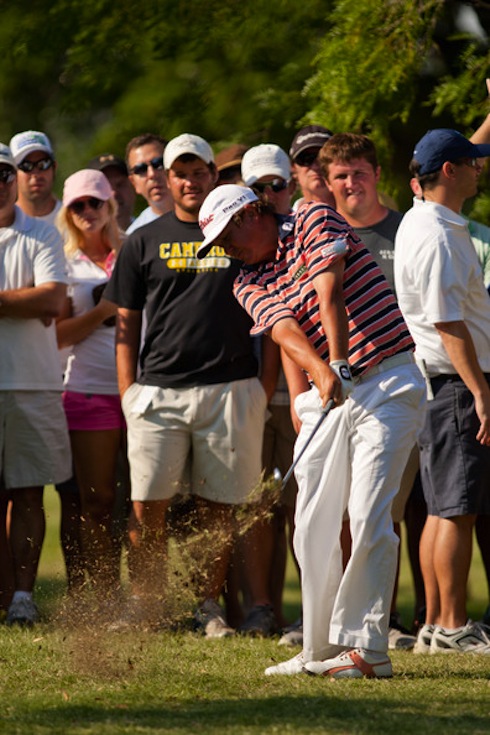 2010, his first season playing all four majors, was less kind to Dufner, who only made $1,121,695. After a mid-season T7 at the Zurich, Dufner finished T5 in the PGA Championship at Whistling Straits.

Dufner started 2011 out hot, finishing second at TPC Scottsdale in February. After finishing regulation tied for the lead, Dufner lost on the second playoff hole, losing to a Mark Wilson’s nine-foot birdie putt. Despite high finishes at the Zurich, the Players, and the Byron Nelson Championship, Dufner hit a rough patch.

His slide was quickly stopped at the PGA Championship. After holding the 36-hole lead with Keegan Bradley and the 54-hole lead with Brendan Steele, Dufner lead for much of the round on Sunday. At -11 on the 15th hole, Dufner had a five-shot lead. He bogyed 15, 16, and 17 while Keegan Bradley (who had made a triple bogey on 15) birdied 16 and 17, and the lead was gone. Bradley and Dufner entered a three-hole playoff, where Keegan bested Dufner by one, and Bradley walked away the winner.

Number Six: 2012
Dufner, who lists his golfing hero as Ben Hogan, entered this year 33rd in the world. Ranked behind guys like Bo Van Pelt, Kyung-Tae Kim, and Sang-moon Bae, Dufner had never made a Ryder or Presidents Cup team. Now? He is second in Ryder Cup points only to Bubba Watson, and he has more than double the points of Tiger Woods.

Dufner started the season with a missed cut but he rebounded quickly with solid finishes at the Humana Challenge (formerly the Bob Hope Classic) and the Waste Management Phoenix Open. After a few poor finishes, he came back strong at the Transitions and the Arnold Palmer Invitational, and came into the Masters hot. Dufner opened with a 69, came back with a 70 on Friday, and co-lead with Fred Couples going into the weekend. He played poorly the rest of the way, carding two 75s, but his T24 was his best finish at Augusta. 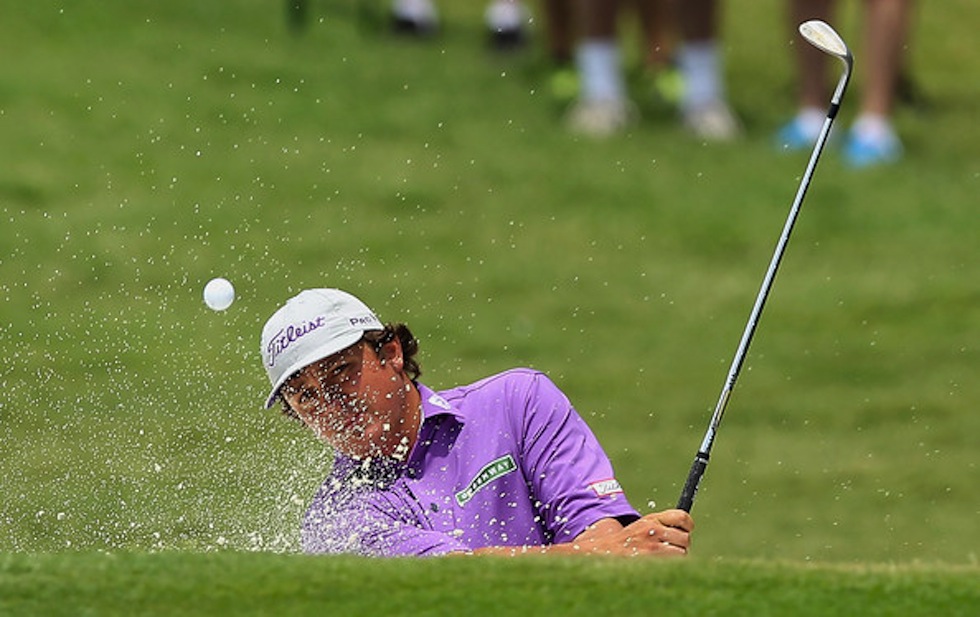 After another sold finish at the RBC Heritage, Dufner came through for his first career victory at the Zurich Classic. While Dufner’s 19 under par score after 72 holes was a course record, unfortunately for him Ernie Els matched that score. Dufner won in the second playoff hole and though he played poorly at the Players, he was back in the winner’s circle less than a months later at the HP Byron Nelson Championship. After stumbling early on Sunday he caught fire in the middle of his round, and tied the lead thanks to a late double by J.J. Henry.

Dufner won it on the 72nd and kept that momentum going into the Colonial. Carding rounds of 65, 64, and 66, Jason had the lead going into Sunday, but eventually succumbed to Zach Johnson.

Number Seven: Dufner on Twitter
Though you might not guess it by watching him on television, Jason Dufner is actually a pretty frequent user of Twitter, and he has nearly 30,000 followers. Some of my personal favorites:

Finally Dwight Howard is on my level. Fire Van Gundy.

I need to find a phone booth after today’s rd…youtu.be/wgNkjv1z6Mg

N Korea not so strong with rocket launching department. I know 5th graders that make those things and get them in the air.

#8 in the OWGR, what?!?! As Kayne would say “thatsh*t cray”. Never would have thought i could crack top 10 in the world #blessed

DearTSA,the way caps on bottles work is after you loosen them,they must tightened so the liquid dont go all over my bag twitter.com/JasonDufner/st…

Oh my goodness. My favorite reality star on my flight to ATL. NeNe from Atl housewives!!!

Number Nine: Dufner’s Bag
Jason Dufner is a full Titleist staffer, and his bag is loaded with clubs from the Fairhaven, MA, company.