Lots of flaws, but one simple (potential) fix.

Eddy Butt has been playing for three years but already has made great strides to become a great player. After working on his short game and putting as well as increasing his driving average to around 280 yards, he has now turned his attention to becoming a more consistent player. Ultimately, he is hoping that all his hard work will be rewarded by winning his club championship.

While I do believe that Eddy’s problems are fixable, I have identified three major swing plane problems that may all be attributable to one root cause.

Read on to see Eddy’s swing and the fixes I’ve outlined for him.

Eddy’s swing can be seen here as a QuickTime movie. This shows the down-the-line angle with his driver. I would highly recommend that you watch the video, identify what you have found as Eddy’s root problem, and then read on to see if you’re right.

The down the line camera angle can be used to identify faults in two areas: 1) posture and 2) swing plane. Even though I separate the two, they clearly can have huge effects on one another. Thus, before pressing play, my first thought is to look to see whether or not the player’s posture is within an acceptable margin of error. 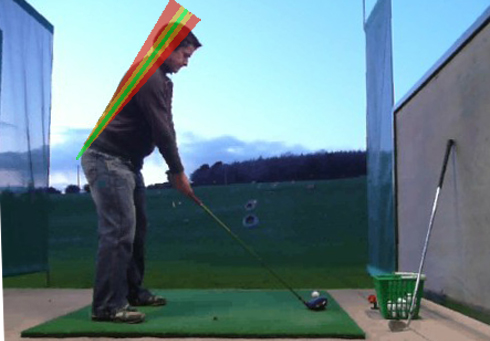 For a player with long-term goals of shooting par or below, I would highly recommend taking the time to get your posture to a point that you will not have to make any adjustments in the future. However, for a player in need of an immediate fix, if your posture is within that acceptable margin of error you can move on to swing plane.

Swing Plane
I need to draw a few lines on Eddy’s swing before I really analyze his swing plane. I will be using these quite a bit in the future so I suppose I should go through them right now. 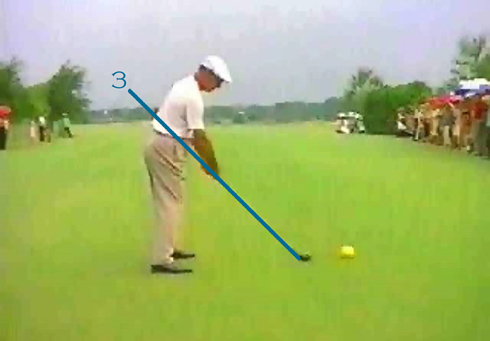 Line 3: Line 3 runs from the hosel of the club through the butt of the grip and continues up approximately two to three feet past your body. This line represents the absolute lowest that your club should ever go. 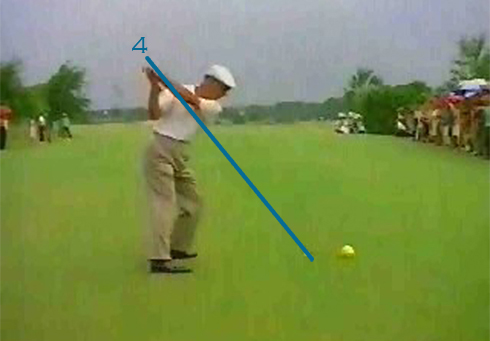 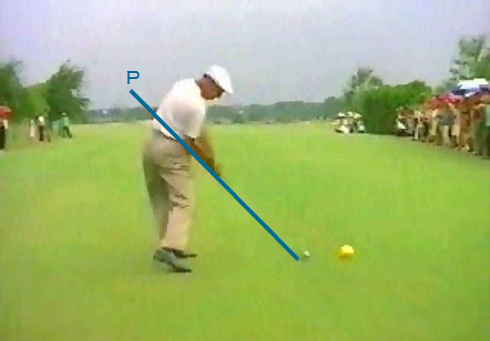 Line P: Line P is slightly more difficult to draw. This line is not drawn at the initial set up but should only be drawn at impact. To draw this line you will need to freeze the frame at impact and then draw a line running from the hosel of the golf club, through the butt of the grip, and continue approximately two to three feet outside of your body. With the proper swing plane you will come down this line and start your follow through on this line.

Let’s take a few frames of Eddy’s swing and look at them with lines drawn. 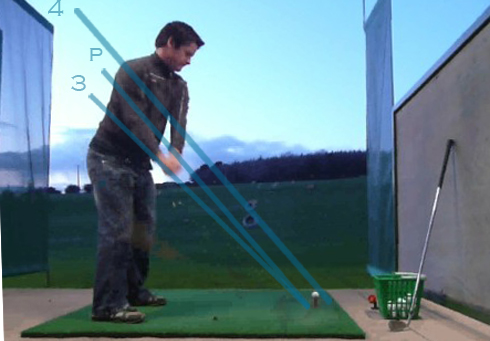 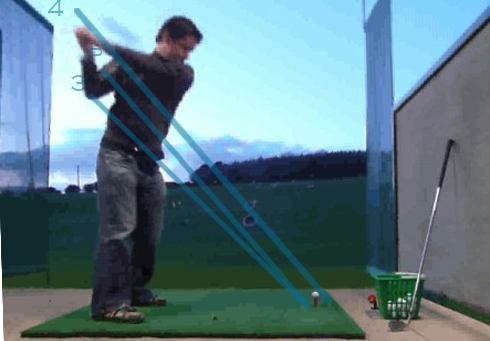 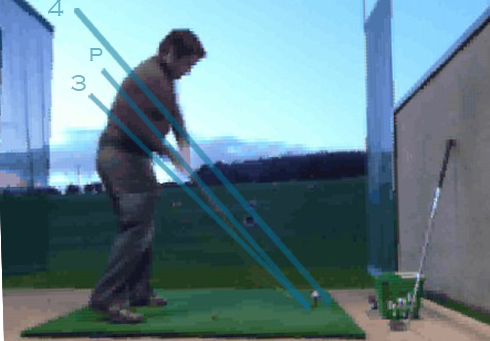 After drawing lines and watching Eddy’s swing you can easily tell that he is having some major swing plane problems. In fact, he is:

So which one of these problems would you choose to work on first? I would be willing to bet that most golfers would say focus on swing plane. It makes perfect sense to do that too; if you are on plane, just like Moe Norman, Raymond Floyd, and Lee Trevino, then what difference does your back swing make?

Unfortunately, your back swing makes a huge difference. Norman, Floyd, and Trevino probably hit millions of golf balls to groove their swing. I would rather take an approach that takes a lot less golf balls and makes it a lot easier to consistently be on plane. For that reason, I would suggest to Eddy that he work on the top of his swing.

Crossing the Line at the Top

First, Eddy’s clubhead and shaft are crossing Line 4 at the top. This does not mean that it is impossible to get back on plane. It just means that within about 4/10 of a second Eddy needs shift his clubhead about two to three feet behind his body, then allow his hands to drop naturally, then begin to accelerate all while sustaining his posture and power. Just writing about that motion was confusing – trying to do that at 100 mph is way too complicated for me. By raising Eddy’s hands, it should make it easier for him to keep his shaft and clubhead below Line 4. 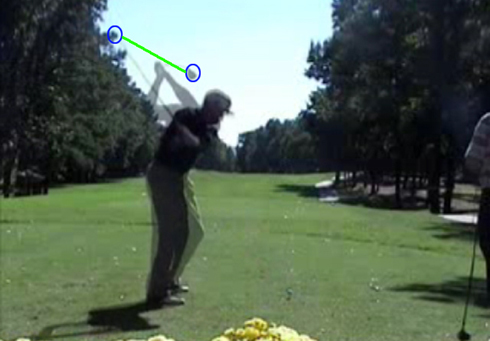 Second, Eddy unfortunately is not making that incredibly complicated movement I described aboveÂ correctly. If you watch his swing in slow motion you can see that as he is moving the clubhead behind his body his hands are starting to drop. This means that he is already below plane with no possible way to get back on once he starts to accelerate. If Eddy were to raise his hands to a point where his clubhead is not crossing Line 4, he could still make that drop and be on plane.

Third, Eddy is taking the club back quite a bit inside. While there are no guarantees that this will be effective, many players who raise their hands at the top of their swing naturally become steeper during their backswing.

So for all those reasons, I am suggesting that Eddy raise the top of his swing.

Raising your hands can be extremely tricky to fix. In fact, this is one of swing changes that you absolutely need to have some way to monitor your swing – be it another person or video camera.

Here are a few things you should keep in mind when changing the top of your swing. 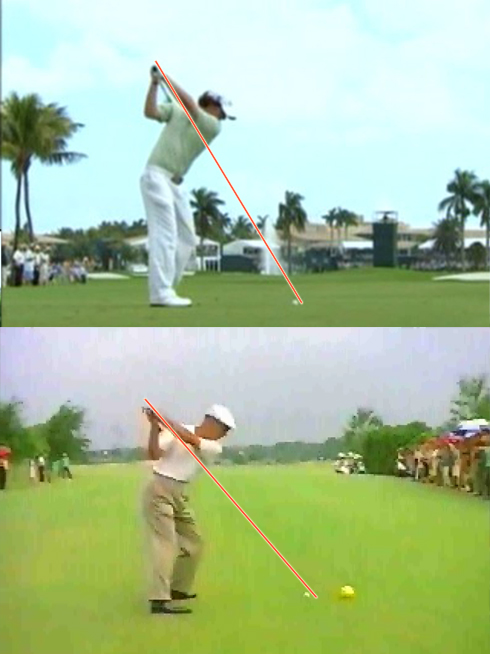 Personalized Line 4: The highest that Line 4 should ever be drawn is through your trailing shoulder at set up. The lowest that your hands should ever go is shoulder height at the top of your swing. Players that utilize a drop before they begin to accelerate – like Eddy – need to have their hands higher at the top of their swing. Players that immediately turn through the ball from the top of their swing can have their hands lower. 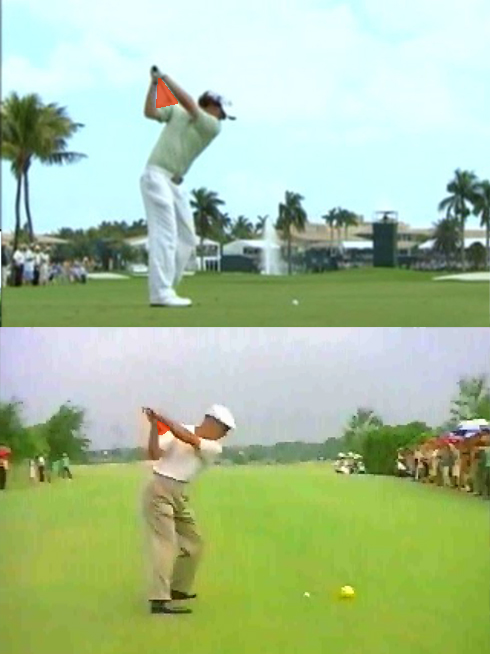 See the Clubhead in the Window: Regardless of where you decided to draw Line 4, you should be able to see the clubhead through a window your left and right arms make at the top of your swing. This is a rough estimation but is incredibly easy to monitor even without lines.

Slow it Down: Odds are you are not going to be able to change this part of your swing instantly. In fact, this is an incredibly difficult change to make. My advice would be to slow down your swing to a point until you can consistently make this move. Once you get it at one speed you can start to speed up little bit little until you are able to consistently make this move at full speed.

Time Line: This is one of the parts of your swing that can be difficult to feel. If a player truly wants to speed up their progress I would take two to three swings on camera and then review your progress. If you plan on just going out and beating balls this swing change could take a very long time.

Eddy had several noticeable flaws but it is my opinion that many of them are attributable to the top of his swing. If Eddy can raise his hands just slightly and position the clubhead so that it is viewable within the window that his left and right arms create, his swing plane should dramatically improve. More importantly, I wouldn’t be surprised if Eddy experiences a noticeable gain in driver accuracy. We’ll see but I look forward to seeing his results.