The evidence points to Tiger not being a user of PEDs, but as a fan are we only looking at the evidence we want to?

While sitting in the grill room of my golf club during the final round of the WGC in Doral, the conversation sparked up again.

It has not been discussed near as much as in the past, but on occasion – especially when Tiger withdraws or plays poorly because of an injury – people start whispering about it.

This time the gentlemen said that in his opinion ever since the PGA Tour put their drug-testing policy in place Tiger has been injured more frequently than in the past. His insinuation was that Tiger was in the past taking performance enhancing drugs and now that the testing policy was in place he was beginning to show wear as Barry Bonds and Roger Clemens did in the later part of their careers.

Here at TST we have discussed this topic at length numerous times and the consensus is that Tiger has not taken anything to enhance his performance. The rumors of Tiger taking drugs like steroids or other PEDs started very early in his career. I can remember discussing it when he first turned pro. He was a very skinny kid in college while winning those three U.S. amateurs. Once a professional he was much bigger and many folks questioned how he got that big.

During hydrant-gate it came out in reports that he was taking Ambien and other drugs. At the time, the story was so big and there was so much to cover that the drug angle was mostly ignored. Then the conspiracy theorists were out in full force when one of the doctors Tiger used for a blood transfusion was caught up in the sale of performance enhancing drugs. Tiger was not implicated in the drug portion, but the story gave the media and the haters plenty to talk about.

After listening for a bit of this grill room conversation, I decided to jump in. I said that the evidence that Tiger has never taken PEDs is much stronger than those saying he did. For starters, Tiger is simply not all that big. Barry Bonds in his heyday would make Tiger look like a midget. A friend quickly countered that Tiger is still pretty ripped, which is true, but I argued that he’s no more ripped than most athletes who work out regularly.

My second point was that Tiger’s injuries are very consistent. What I meant was that he seems to injure the same things. Typically his knee and more recently his back and neck. He does not have little injuries that pop up seemingly out of nowhere that don’t correlate to each other. Lastly I said that I am unable to see how being buff like a body builder is going to help him play golf. Sure it will help out of the rough, but fitness and endurance muscle training will better serve Tiger than becoming a muscle man winner.

One point that we both agreed was that if the PGA Tour was to test Tiger and find that he had used PEDs they would be in one heck of a pickle. If they suspend the best player and biggest draw to the Tour they will put all of his records which are basically a big part of the PGA Tour history in question. 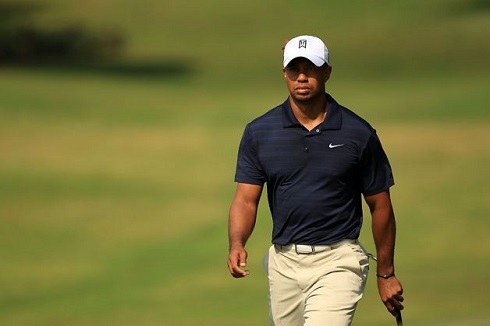 In the Bay Area, where I live and play, this topic holds a bit of extra weight because of Barry Bonds. Many people who live here are Giant fans and they enjoyed the ride that Barry Bonds took them on. Many Giant fans defended Barry until the very bitter end saying that he was not taking PEDs. Fans would get accused of being, well, fans. There were letting the fact that they were being fans cloud their judgment about what Barry was doing. I am not a Giant fan and I watched it happen more times than I can count. There is something about being a fan that causes you to believe when the evidence is cloudy. Barry was never officially caught so until the very end many fans here kept on believing. For the longest time much of the evidence against Barry was circumstantial so it was easy for fans to debate with those who felt he was using.

So when this gentleman brought this to my attention it did cause me to pause for a moment. Was the fact that I had become a Tiger fan recently causing me to dismiss evidence that I should be considering? I still say no, the evidence that Tiger is not using is still much too strong to say that he is using any sort of PEDs. Tiger has become such a polarizing figure in the game of golf now. I find that fans of golf love him or hate him. Rarely are golf fans neutral on him. This makes it hard to debate this topic because depending how you feel about Tiger can likely determine how you feel about whether or not he has used PEDs.