This isn’t about the magical number of 18, or even 19, but rather about a magical year in golf.

If you only read the title of this article you might think this is another comparison on who is the best golfer of all time. No, considering the stall that Tiger has had in his current play it really ends the debate for now. Over the course of his career Jack is by far the better player. More major victories, 18 versus 14, but what really puts Jack over the top for me is the number of second-place finishes in majors, 19 versus six. And if you include top-ten finishes in majors Jack really starts to pull away.

In the bar last week I made the hypothesis that 2000 for Tiger was better than any single year that Jack had. When I started looking into it I was definitely right. Jack’s best year was 1972 when he won the Masters, the U.S. Open, finished second at the Open Championship, and tied for 13th at the PGA. Jack had an excellent 1980 when he won the U.S. Open and the PGA, but 1972 was better. To be frank when I looked into it Jack had an incredible run in the 1970s. He was in the hunt in almost ever major played during those years, but not only in the hunt but he had an enormous amount of top tens. Still 1972 was a great year but it was no match for Tiger’s 2000.

In 2000 Tiger started by finishing fifth at the Masters, then at Pebble he did not just win the U.S. Open he obliterated the field. He finished 12 under par and Ernie Els and Miguel Angel Jimenez who finished second were both three over. He then went on to win the Open Championship by eight shots and the PGA in a playoff. He finished off the “Tiger Slam” in 2001 with a win at Augusta National in the Masters. In 2000 Tiger teed it up in 20 tournaments and won nine of them. Although Jack had no World Golf Championships, Tiger did had one of those at Firestone. And, if not for Hal Sutton’s “be the right club today!” he would have added a Players (the unofficial fifth major) to his trophy case as well. Truly an incredible year. 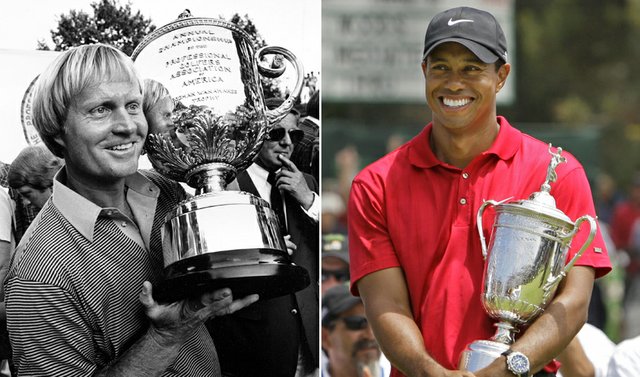 One counterargument is that Jack had tougher competition in 1972, including the likes of Lee Trevino, Gary Player, and an older but still active Arnold Palmer. There are others I am forgetting but there is a large number of majors collected by that group alone, so they knew how to get it done. The list of major competitors for Tiger is not nearly as impressive, Vijay was at the top of his game at that time but he hardly had the game to compete at all four of the majors. At that point a majorless Phil Mickelson and David Duval, and the biggest competitor in terms of major wins was probably Ernie Els.

2000 was probably the start of what many call “parity” that golf was starting to form. Meaning that many different players could come up at any time and win a major. The thing is that Tiger was so dominant that the likelihood of others winning a major was much lower. Jack was certainly intimidating but it seems the players of his day were not as intimidated by his presence on the leaderboard.

When I analyze it further Tiger 2000 is likely the best year had by any player ever in the majors. Ben Hogan’s 1953 was virtually a grand slam considering he could only play in three majors and he won each one. If Ben has healthy there is no telling how great 1953 could have been, it may have rivaled Byron’s 1945 in terms of wins. The thing about 1953 is that they had not really identified each of the three tournaments as majors during that time period. Case in point is that the PGA and Open Championship were played on virtually the same weekend. The Masters although a very prestigious tournament did not share the status that it does today.

Bobby Jones season in 1930 is another candidate for a best year in the majors, and what impressed me about Jones season was that he had to win so many matches in match play to win them. You would think eventually you would run into a hot player somewhere who could beat him. And if we consider the greatest year in golf you must say that Byron Nelson’s 1945 was definitely the best. He won 18 tournaments out of 36, and of course had the streak of 11 in a row. That record is safer than DiMaggio’s 56 game hitting streak. No modern golfer will ever even come close. Still, considering the global game that golf had become by 2000 Tiger faced much deeper fields than these other players. The amount of money in golf by this time had drawn very talented athletes to golf more than ever before.

The funny thing about someone like me writing this article is I am not a Tiger fan. In fact I am one of those rooting against him, I am a Phil fan, and as I will argue at a later date you are either one or the other. Considering that I am unable to deny the greatness of Tiger’s dominant 2000. It was truly a special year as I argued the best year had by any player in the majors.

8 thoughts on “Tiger vs. Jack – A Different Perspective”