Stinger Tees – yet another tee that helps you hit the ball further. The difference? These actually make sense, and are affordable too!

Ever since seeing The Golf Channel‘s Playing Lessons from the Pros with Cobra Long-Drive Champs Jason Zuback and Brian Pavlet, I’ve been intrigued by the “Stinger tee.” Zuback and Pavlet recommended it as “necessary equipment” that gives them an advantage. When LPGA cutie Laura Diaz professed to using the same tees in her Playing Lesson I had to give Earl Weiss, owner of Stinger Tees, a ring.

A few days later, I had my grubby paws on some 2¼” and 3″ Pro XL Competition Stinger tees. The tees are as attractive – the natural wood grain doesn’t leave paint marks on my clubs – as they are functional. The thinner tees are easier to stick into hard ground and the sharper points make these tees great groove cleaners. My course’s superintendent is a fan of Stinger tees too: “they don’t chew up our mower blades as much as thicker tees or those damned plastic tees.”

The Sand Trap takes a look at Ultimate Golf Fitness Guide by Mike Pedersen. At $47, this eBook tips the “expensive” scales a bit, but it’s worth it in the end.

Golf is a game of precision, flexibility, and power. I live in Pennsylvania, so to say our golf season is “shortened by winter” is an understatement. It’s difficult to hit balls when there are three feet of snow on the ground, but despite that, I’ll be improving my golf game this winter. How?

Using Mike Pedersen’s Ultimate Golf Fitness Guide. Pedersen’s eBook is priced at $47 and aims to offer a range of stretches, exercises, and dietary tips that will help you improve and maintain your golf game. 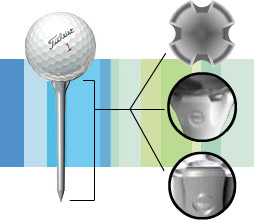 We’ve previously written about the epoch-3 tees from Evolve Golf here at The Sand Trap .com in an article titled “Tees Me.” We’ve even reviewed another kind of tee, the Brush-T. What is up with all of these tee reviews? Tees are just a peg? You put your ball on them, then you hit the ball hard. Simple, right?

Not so, says Evolve Golf (and the Brush-T folks). When a ball is struck from a standard wooden tee, friction between the tee and the ball at the moment of impact can have a dramatic effect on both the distance and accuracy of your drives. This is true of deflection as well: the relatively hard lip of a standard wooden tee can redirect your ball slightly, imparting spin and sending it in the wrong direction. The Brush-T, for example, can grant you up to an extra four yards and 3% better accuracy! The epoch-3 was independently tested to deliver an extra 1.81 yards in distance and 2.34 yards more accuracy.

The hammY putter is an interesting take on rolling the ball into the hole. How does it fare? 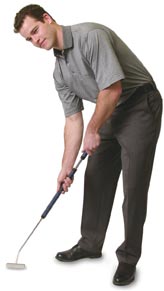 If I handed you a golf ball and asked you to roll the ball to the hole, how would you do it? Assuming you’re right-handed, you’d probably face the hole, put your left foot forward, and roll the ball underhand towards the hole. The hammY Putter enables you to putt the same way; the natural way.

After all, a three year old can roll a ball to a hole, right? They don’t do it by standing facing perpendicular to their target and throwing the ball straight sideways. That’s how most of us putt, however. Sideways. The hammY Putter aims to change that (pun intended).

The Scotty Cameron Red X is a premium mallet putter. Will it help you make more putts? 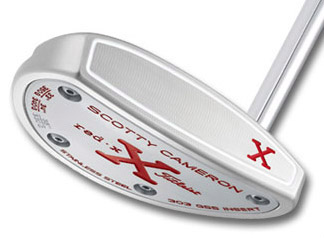 I’ve spent over a decade playing with an old Ray Cook M1-X putter. A mallet putter made popular by Nick Price and a few others many moons ago, it has served me well but has felt rather “dead” lately. The grip has become slick and hard and the top of the club had distracting little nicks in the soft metal.

The quest for its replacement began and ended with the Red X mallet from Scotty Cameron (and Titleist).

The Brush-T guarantees straighter, longer drives. What doesn’t these days?

The Brush-T claims that it can help you hit longer, straighter drives by eliminating much of the friction between ball and tee:

The unique qualities of the Brush-T mean that the side spin or interference, all too often associated with plastic and wooden tees, can be eliminated. The bristles provide raised support for the ball, but still give unprecedented flexibility. Independent testing in San Diego and California, showing a marked improvement in the dispersion rate, thereby delivering greater accuracy.

Let’s ignore for a moment the fact that San Diego is in California. Let’s also ignore that “a marked improvement in the dispersion rate” can’t “deliver” greater accuracy, it is greater accuracy. And hey, if we want to be technical, it’s not greater accuracy but greater consistency. A loose group of balls in the middle of the fairway beats a tight cluster 20 yards right, doesn’t it? 🙂

The AJ Golf series promises to reveal the truth about golf for only $89.95. Does it?

If you watch The Golf Channel for any amount of time, you’ve seen either the 30-second, 60-second, or 30-minute commercials for AJ Reveals the Truth about Golf. You’ve no doubt seen Da Bat and wondered just what point it might offer. You’ve seen AJ’s “reduce your handicap by 30% and increase your drives by 30 yards in 90 days” guarantee.

I’m a 6-9 handicapper who has a slightly open stance, a strong grip, and a slight high draw. I average about 275 off the tee when I’m playing well and have a relatively solid short game. I was skeptical that AJ Bonar could do much to help my game.

This is the part of the review in which – if it were an infomercial – I’d say “boy, was I wrong!” Unfortunately, I was not. AJ did very little, if anything, to help my game. This doesn’t mean the videos are worthless: just that they didn’t help me a whole lot.

Braz, a 27 handicap golfer, reviews the Wilson Deep Red irons: in his opinion, an excellent set of irons for the mid- to high-handicapper. 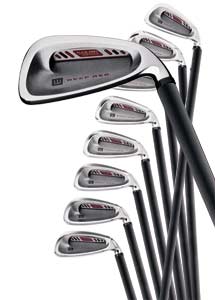 Executive Summary: the Wilson Deep Red Irons are an excellet set of irons for a mid to high handicapper.

About the Purchase
Unlike Erik, I’m happy to report exactly where I purchased my set of Deep Red irons. I purchased the 2003 Deep Red Irons from rockbottomgolf.com, over eBay. They have a direct sales site, and if you feel like gambling, you can try their auctions. I opted for the latter choice, and ended up saving almost $100 in the process. If you’re in the market for a club or set and don’t mind older clubs, give them a shot.

Look and Feel
These clubs are aggressive, and a great deal of that bold aggressiveness comes from Wilson’s Fat Shafts. Instead of the standard hosel width, the Deep Reds have a nearly half-inch hosel which slams right into the head of the club. Most people don’t know Wilson for their golf clubs, but standing next to a guy with “normal” irons, you definitely get some glances.

I recommend that you DO NOT buy equipment from BHMGolf.com. Ever.

A few months ago, I purchased a Titleist 983K from bhmgolf.com (I’m not linking to them for a reason). They were $50 cheaper than my neighborhood shop. I forgave the abrupt fashion in which the owner (Brian) handled my transaction as “he’s probably busy, getting lots of orders for his stuff.”

I was more than accurate. I called again a day or two later to check on the order status and was treated rather rudely. I received the club a week later… with the wrong shaft. I’d wanted the YS-6, not the Graffaloy. I called – during his business hours – and left a message. I called again the next day. I sent emails. I called some more. I never received a return call or a return email. One time, I did get ahold of Brian and was sworn at and hung up on.

I exchanged the club at a local shop for one with the correct shaft. The $50 extra I would have paid to simply buy it from them in the first place is $50 I’d have gladly paid to avoid the hassle of dealing with BHMGolf.com.

Clearly, Brian H. Meyer of BHMGolf.com does not want my repeat business.