The OGA’s uniform ball experiment was not even a success in the eyes of the anti-ball crowd.

A few months back, the rebel Ohio Golf Association (which once legalized the tamping down of spike marks) bucked the rules once again and played their “Champions” event with a uniform ball. The results? OGA officials came to realize that golf ball technology is a complex science.

What’s more, they came to realize that a uniform ball is decidedly not the way to solve the distance dilemma some believe exists in modern golf.

The Debate
There are many who believe the modern golf ball simply travels too far. These individuals, buoyed by the fact that major championship courses now regularly measure 7,500 yards, cite the ball as the primary (and often only) cause of the problem. They claim that the modern solid-core golf ball simply goes too far – farther than the older wound balls – and that the USGA and R&A have missed the boat in regulating distance. These “super balls” make PGA Tour golf a boring driver-wedge game requiring monster-length courses while simultaneously reducing the needs to play with feel or hit 4-irons to anything but the occasional par-three.

Many times, these critics belong to one or more of several categories: golf course architects that feel they need to build 7,500-yard courses to be taken seriously, former players longing for their glory days, or traditionalists fearful of losing some older courses that don’t have the room to expand.

In virtually every instance, other critical factors are ignored or cast aside as irrelevant. Statistical factors like Dave’s 40-30-20-10 rule show that driving distance is a small part of winning on the PGA Tour. Other factors like the fitness trend, advances in course conditioning, launch monitors, lighter, longer drivers, and so on all contribute to increased distance. It ain’t just the ball.

I don’t deny that the modern golf ball travels further than the Titleist Tour Balata, but I do deny that it’s a “problem.” Modern PGA Tour golf is still about hitting greens and making putts, as it’s always been, and contrary to those who think that players hit the ball closer with a wedge from the rough than an 8-iron from the fairway, that advantage shakes out to less than half an inch!

One Ball for All
Any one of the factors above can add distance to a guy’s tee ball. Put a light-weight shaft in a persimmon clubhead and smack a balata ball and it will likely go farther simply because the light-weight shaft will let the player swing faster. Give a player one shaft and he’ll lose distance, but carefully study a launch monitor and find the optimal shaft, and players will hit the ball farther. 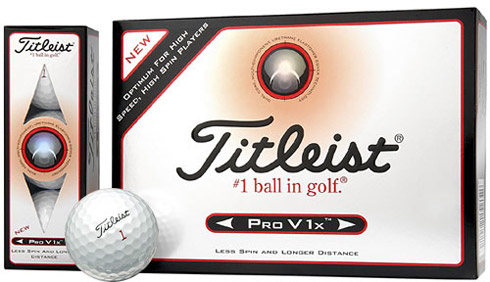 A “uniform ball” would remove choice. If you’re a high-spin player? Tough luck. No low-spin version for you!

Launch monitor testing was done at the OGA event, and some interesting findings were had. That many long bombers lost distance is not surprising – the rebranded Volvik ProsPect isn’t exactly suitable for guys who swing at 120 MPH. No, what’s surprising is that some of the shorter players actually drove the “uniform” ball further – 5-10 yards – than the “modern” ball against which it was compared. In other words, some players gained distance while others lost it.

In a game that’s prided itself for centuries on equity and fairness, the lack of fairness inherent in forcing a “uniform” ball on golfers is the single biggest reason why a uniform ball will not succeed. I’ve yet to hear of any compelling evidence from the OGA test – and I’ve waited these many months for just that – because golfers with a shred of common sense already knew what the results would be. Some golfers would suffer more than others, and that’s exactly what happened. What many didn’t predict was that some golfers wouldn’t suffer at all, but would actually gain distance. Go figure.

The OGA learned that the science of distance is a complex issue and that one uniform ball cannot reasonably be used to equally punish or reward a wide variety of golfers. Titleist offers the Pro V1 and the Pro V1x for a reason. We’ve got the HX Tour and the HX Tour 56, the ONE Black, Gold, and Platinum, the TP Red and Black, and so on for a reason. Within the rules and under the Overall Distance Standard (ODS), these balls offer different performance characteristics for players with different swings. Lucas Glover played the high-spin Pro V1 last year in winning the Funai Classic, but Joe Durant used a Pro V1x to win it this year.

Launch monitors allow golfers to fine-tune everything from the tee – their driver loft, face angle, center of gravity, swingweight, shaft weight, shaft flex, shaft torque, shaft length, ball spin, ball speed, sidespin, and tens of other factors that eke as much performance out of their swing as possible. Some golfers are naturally higher-spin players while others need a little extra spin, and the line cannot be drawn between long drivers and short knockers.

Choice exists, within the rules, because players are different. Penalizing one group of golfers simply because they have the skill to swing faster while simultaneously rewarding those who can’t generate as much speed would put professional golf that much closer to the scripted, pre-determined world of “professional” wrestling than actual sport.

In the End
Some may suggest that the only reason ball makers are against a uniform ball is because it would hurt their ability to differentiate themselves from competitors.

But I’m not a ball manufacturer. I’m a golfer who appreciates being able to choose a low-spin ball to suit my swing. I’m a golfer who’s looked at the stats and who realizes that distance doesn’t contribute much, if anything, week to week on the PGA Tour, and that hitting greens and making putts still rule the day. And I’m a fan of professional golf because it maintains a tradition of fairness and equity.

A uniform ball creates more problems than it solves, and given the vast number of contributing factors that have led to increased driving distances over the past 10, 50, and 100 yards, going with a uniform ball is a horrible solution to what may in fact be the smallest of concerns in a problem not everyone agrees is actually a problem.

6 thoughts on “One Ball to Rule them All?”