Greg Rowley writes a book giving you insight on all the “little things” that can make golf a maddening mystery. Think of it as an insider’s guide to golf, with a endless supply of adjectives for chunks and shanks. 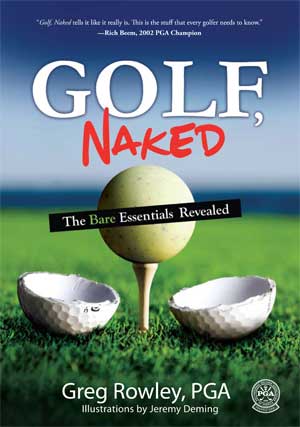 The holidays are just around the corner and if you’re like me, you might be starting to put together a list to give your love ones on the golf-related items you want to receive (otherwise know as “Dropping a Big Hint”). While not everyone can afford to get you the latest driver, putter, or shoes there are many items that are quite a bit more economical and might in the long run make you a better golfer than the latest and greatest in club technology.

A book review probably isn’t the first thing you think of when you consider the reviews we’ve done here at The Sand Trap. While the vast majority of reviews are equipment in one form or another, occasionally a book comes along that piques our interest. One such book is Golf, Naked by Greg Rowley, which was released by Pick It Up Publishing.

John Coyne writes a story about golf, life, and the choices we make and dispenses some wisdom from none other than Ben Hogan. 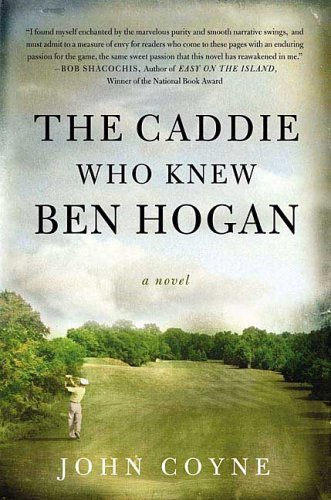 The Caddie Who Knew Ben Hogan was written by author John Coyne who has penned over 20 books of fiction and non-fiction. Several months ago, we reviewed his latest book, The Caddie Who Played With Hickory and if you enjoyed that story, you most certainly will want to check out his earlier work as well.

The story weaves between forbidden love, the bond between a golfer and his caddie and wisdom about life as told by none other than Ben Hogan. What happens is a story about golf, life and the choices we make and how “it’s always the next shot that is important.”

John Coyne weaves a tale about golf, love and the pursuit of your dreams that might just make your “must read” list. 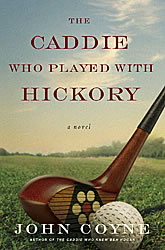 The Caddie who Played with Hickory is the newest novel written by John Coyne, author of over 20 books of fiction and non-fiction.

As a former caddie, Mr. Coyne is able to share his experiences of how the caddie system worked at a country club and how caddies of the mid-1900s interacted with the members.

This knowledge is woven into the story of a boy who is just graduating from high school and is trying to determine what to do with his life. For the time being, he’s content to caddie and play golf. What happens in the summer of 1946 changes his life forever.

Continue reading ““The Caddie who Played with Hickory” Book Review”

Bob Skura is no Bob Rotella, but for me at this point in time, that’s a good thing. 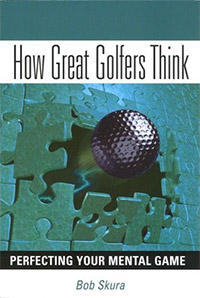 Just about every golfer has their demons. Whether it is a temper or negative attitude or thinking about the score you think you can make, none of these things can positively impact round of golf. Bob Skura’s How Great Golfers Think is a book designed to help golfers of any skill level deal with those demons.

Where How Great Golfers Think differs is in its approach. Most “mental” golf books I’ve read give you stories and whimsical, common-sense advice. While serving a purpose, this often does not stick with you over time. How Great Golfers Think is more of a seven-course meal and leaves you satisfied and full, laying out steps and a plan for golfers to better improve their mental approach and ultimately lower their scores.

Using a lesson-story format through the regular foursome of Kip, Andy, Frank, and Jason, Skura lays out three fundamentals to success:

Think you’ve got what it takes to make it on tour? You might want to consult with the doctor, first. Dr. Reid Sheftall, that is, plastic surgeon-cum-Malaysian PGA touring professional. 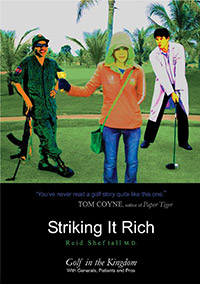 One of the most often-touted explanations for the appeal of golf is that we play the same game, on the same courses, under the same rules, as the greatest players in the world. Is it any surprise, then, that so many of us entertain Walter Mitty-esque fantasies about turning pro? Come on, admit it, if you’ve piped a drive down the middle, followed it up with a pured iron and one putt, you’ve probably allowed yourself to wonder and fantasize, “What if…”

Truth is, most of us are about as likely to see tour action as we are to see, well, Gisele Bündchen action, but every once in a while, a real-life Walter Mitty shows up on the radar. Such is the central theme of Reid Sheftall’s Striking it Rich: Golf in the Kingdom, with Generals, Patients, and Pros. The book will prove entertaining reading for just about any golf-obsessed Sand Trap reader, and might just teach you a thing or two about the game you love most.

There are so many things both fascinating and puzzling about Striking it Rich it’s tough to know where to start. The author, Reid Sheftall, is an American-born, expatriate surgeon who, after completing his medical training in the U.S., emigrated to Cambodia where he has a thriving medical practice at the American Medical Center in Phnom Penh. In the preface, we learn that Sheftall was a talented, promising junior golfer, who left the game due to waning interest and a temper ill-suited for the game.

Ian MacCallister is up to his old tricks. This time he’s committing identity theft… of a sort.

We last heard from Ian MacCallister when he launched his anti-NXT, anti-technology blog at nxtube.com.

With this week’s Deutsche Bank Championship being played in Boston – an hour’s drive from Titleist’s headquarters – we expected to hear from Ian once again. He did not disappoint, as early this morning the FedEx man delivered not a Cup but a CD to Sand Trap headquarters. There was no return address, but the CD clearly came from the GDAD chairman and contained a single file: the movie you see to the right. Our hunch? Ian plans to release this ad for airplay during Sunday’s coverage of the Deutsche Bank Championship.

Tag along with a media rookie at The Memorial.

I had the opportunity to attend The Memorial Tournament last week at Muirfield Village Golf Club in Dublin, OH with our editor, Erik (who took about 2000 pictures over the week). After my experience, it’s going to be tough to go to another tournament as a regular spectator.

This wasn’t the first tournament I’ve attended. I previously attended the 2002 PGA Championship at Hazeltine National Golf Club and the 2004 PGA Championship at Whistling Straits, but it being inside the ropes as a member of the media provided an entirely different feeling to the week.

Read along as I share some of my thoughts on being a media rookie at The Memorial.

Continue reading “Inside the Ropes at The Memorial”

This video takes you onto the driving range with Dean Snell and Sergio Garcia for the introduction of the TaylorMade TP golf balls.

We’ve told you about the new TP Balls from TaylorMade. We’ve shown you the reveal video. We’ve told you what it’s like to be there and we even produced a special-edition podcast. Now it’s time for the final piece, the video from the driving range last Monday morning.

The video largely features Dean Snell talking about the development of the TP Red and the TP Black. He begins by talking about the TrackMan system TaylorMade uses to analyze launch and flight data. He talks about the problems they had to overcome in getting pros to switch to the TP balls. You’ll also see Sergio’s, uhh, “unique” ball stamp. In the end, Sergio hits two drives – one with his old ball and one with the TaylorMade TP Red.

Throughout the video you’ll catch a glimpse at some of the private jokes and the lighthearted nature of the whole event. Enjoy.

I am a golfer. We’re all golfers. TaylorMade’s new ad seeks to drive that point home.

TaylorMade’s new ad – introduced Sunday evening at the TP Ball Launch, is called “I am a golfer.” You’ve likely seen the TaylorMade ads in recent publications, but this 60-second video debuts today worldwide.

The ad features the voiceover of U.S. Ryder Cup Captain Tom Lehman, who upon reading the script and seeing the video the first time, got chills. The part about “I still feel my dad’s hands teaching me to hold a club” was especially touching, TaylorMade CEO Mark King told reporters.

You can view the ad here.