First Custom Fit, but Not Sure I Agree With it! 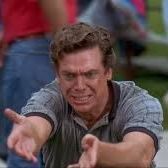