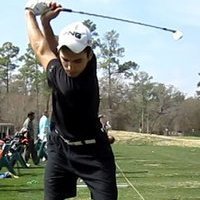 What makes a golf ball buzz/zing through air?